Compiled between 1925 and 1932 by José Palacio (Montevideo, 1875–Bilbao, 1952), the Palacio Collection of Oriental Art entered the Bilbao Fine Arts Museum Collection in two parts, the first in 1953 through a donation by Palacio’s heir, María de Arechavaleta, who on her death in 1954 bequeathed the rest. The interest of the collection lies in the formal and artistic qualities of the articles and in its quite exceptional nature, this being one of the few of its kind in the area.

Of the 291 works from the Far East, 221 are examples of Japanese art. Others come from China, South East Asia, Korea and Vietnam. The collection includes paintings, prints, one of the best collections in Europe of tsuba (hand-guards on the blades of Japanese sabres), inro (cases with compartments that hung from the kimono belt), suzuribako (writing boxes), sikisibako (boxes for storing papers), Namban pieces made for export and which reflect Western tastes, and ceramics for the famous tea ceremony or chanoyu. Most works date from the Edo period, which lasted from the 17th to the 19th century, when Japan was still proof against influences from the outside world and was producing its most characteristic art.

Curated by the expert Fernando García Gutiérrez, S.J., Japanese Art and Japonism: Bilbao Fine Arts Museum brings together for the first time, thanks to the generous sponsorship of the BBK Fundazioa, all the catalogued works of Japanese art (221) in the Palacio collection, parts of which have been shown to the public on a number of occasions, including 1998 (93 pieces) and 2010 (114 works). The exhibition also highlights the influence of Japanese art on 19th-century European art and on the abstraction and art informel of the second half of the 20th century, through thirty or so artworks by Gauguin, Tàpies and Chillida, among others, which also belong to the Museum collection.

To coincide with the show, the Museum Conservation & Restoration Department and a research team from the Analytical Chemistry Department at the University of the Basque Country’s Science & Technology Faculty performed a pioneer study with non-destructive testing methods to provide an exhaustive analysis of the state of conservation of a selection of 112 works, divided into two groups. In the first were 37 tsuba, two kozuka (the handles of small kogatana knives) and a box in the shape of a female mask, all worked and decorated in a range of metals and dating from between the 17th and the 19th centuries.

Forming the second group were wood-based lacquered objects dating from between the 16th and the 19th centuries: 29 inro, 38 boxes and cases, two Namban pieces for export and a further three articles (a late-19th century table also for export, an ornamental comb and a cup for the traditional Japanese alcoholic drink sake.

Research identified the basic metals and alloys used and the ones employed in tsuba decorations. The study also established the nature of some of the apparently similar materials used in tiny inlays on lacquered objects, including mother-of-pearl, ivory and animal horns.

Establishing the materials used to make the articles neatly complements the historical and stylistic essays, by a number of experts, included in the exhaustive catalogue published by the Museum to accompany the exhibition: apart from curator Fernando García Gutiérrez, S.J., V. David Almazán Tomás (University of Zaragoza), Yayoi Kawamura (University of Oviedo), José Luis Merino Gorospe (head of  the Museum Conservation & Restoration) and Arantxa Pereda all made valuable contributions to the catalogue.

When in the late 19th century the Meiji dynasty (1868–1912) put an end to Japan’s isolation, interest in the art and culture of the Land of the Rising Sun spread like wildfire throughout the West, as commercial relations rapidly increased.

Now that Americans and Europeans were able to visit Japan and bring back objets d’art, people became fascinated by Japanese culture. This fascination found expression in the lasting phenomenon of Japonism, which influenced painting, precious metalwork, literature, film and fashion. Japonism peaked in Paris between 1860 and 1900, although enthusiastic collectors were also to be found in Germany and the United Kingdom. Japonism made a not inconsiderable mark on Western art movements like Art Nouveau, Impressionism, Symbolism and, later, on avant-garde trends ranging from Abstraction and Art Informel to Minimalism; indeed its imprint is still visible today. Understandably, collectors preferred objects that were easy to ship, like engravings, embellishments for swords, pottery and ceramics and lacquers, and the popular netsuke (a sort of stopper attached to a cord or string used to hang small objects from the belt of the traditional Japanese kimono).

Enthusiasm for collecting Japanese art never really caught on in Spain, except perhaps in Catalonia, where trade in Oriental articles was established, together with collections like the Mansana, now broken up but which in its heyday consisted of more than three thousand articles. The 1888 Barcelona Universal Exposition or World’s Fair contributed decisively to the development of the phenomenon. Although José Palacio was born in Montevideo, his parents were Spanish (his father was from the Cantabria region and his mother from Bilbao), and he settled in his mother’s home town when he was just 15. Palacio made a most unusual figure in early 20th-century Bilbao, where collectors preferred older European paintings and only much younger artists like Ucelay and Guiard seemed capable of appreciating the very different characteristics of Japanese aesthetics.

Although documentary records referring to José Palacio are scarce, we do know that he graduated in Law from the University of Salamanca in 1898 and that he began to study architecture in Barcelona in the first decade of the 20th century, although he never appears to have worked in either profession, art and music being his only known enthusiasms. This cultivated, erudite dilettante, a member of the haute bourgeoisie of turn-of-the-century Bilbao, frequented local cultural circles and travelled around Europe to attend concerts and art auctions. Between 1925 and 1932 he is known to have visited Paris regularly, where much of his time was spent at the prestigious auctions of Oriental art held at the Hôtel Drouot and the Galerie George Petit.

As part of his bequest, the Museum has books and catalogues with handwritten notes on prices and acquisitions, press cuttings of art criticism from Le Figaro newspaper,and booklets and sheets of paper from the Hôtel du Louvre where Palacio wrote up his experiences as a traveller and art aficionado. He was also interested in Renaissance and Baroque painting and the complete collection runs to 523 works, although the unusual nature and high quality of the Oriental section is really quite exceptional. As a connoisseur, José Palacio appreciated sophisticated articles like the netsukein wood or ceramic pieces for the tea ceremony, items a long way from the predominating taste of the time.

Through the 221 objects included in the exhibition, Japanese Art and Japonism: Bilbao Fine Arts Museum showcases the main features of Japanese aesthetics, which may be summed up in the words of the philosopher Suzuki Daisetsu: “Beauty is not in the external form, but in the meaning that this encloses”. Four key concepts are applied in architecture and furniture, in gardening, calligraphy and painting, in pottery and lacquer, and indeed in all the aesthetic aspects of Japanese life. In the first place is the close connection between art and nature, and, as opposed to Western anthropocentrism, man’s relation with nature. Then there is an essential simplicity, the spiritualization of art which occasionally leads to a kind of formal abstraction. Besides a tendency towards decorative forms, the Japanese showed a facility for assimilating styles and trends, ranging from cultural elements from China (particularly from the Buddhist Zen school that arrived in Japan in the 12th century) to Western influences, which first appeared in the 16th century and intensified from 1888 when Japan dismantled its barriers against the outside world.

The works of Japanese art are here divided into three major groups, “The Sacred and the World of the Knights”, “The Engraving in the Edo Period (1615-1868)” and “Daily Life. The Art of the Urushi Lacquer”. To complement these sections, an area dealing with José Palacio displays a range of documents referring to the collector. Thirty or so works from the Museum collection also give an idea of the effects on art of the phenomenon of Japonism: Alfred Stevens, José Echenagusía, Paul Gauguin, Darío de Regoyos, Francisco Durrio, Ignacio Zuloaga, Francisco Iturrino, Anselmo Guinea, Adolfo Guiard, Juan de Echevarría, Antonio de Guezala, José María Ucelay, Henri Michaux, Antoni Tàpies, Joan Josep Tharrats, Fernando Zóbel, Eduardo Chillida, Rafael Balerdi and José Antonio Sistiaga.

1.- The Sacred and the World of the Knights

Shintoism, which venerates the spirits that live in the natural world, was Japan’s traditional religion until the 12th century, when Buddhism, an import from China, became the majority religion and the Buddhist Zen sect a decisive influence on Japanese art and aesthetics. Zen thought and aesthetics are at the root of the tea ceremony, a ritual that seeks to help participants achieve inner harmony. Closely connected to the sacred were the Samurai (Japanese military knights whose lives were governed by a strict code of honour). The Western world was fascinated by the Samurai, who played a decisive role in Japanese arts, as clients and as iconographic motifs, particularly in paintings and engravings.

This first section includes sacred portrayals of Buddhist figures (a 9th century sculpture and a 15th century painting), 19 ceramic articles connected with the tea ceremony, an emaki-mono (a narrative painting done on a horizontal roll) and five ink drawings, 37 tsuba (hand-guards on the blade of the Japanese sabre or katana) and two kozuka (kogatana knife handles), dated between the 17th and 19th centuries.

One of the most significant and relatively large parts of the Palacio Collection is an excellent set of engravings and in particular those associated with the popularly-inspired ukiyo-e genre painting. Included are prints by the most representative artists working in the genre, Utamaro, Hokusai and Hiroshige, who created works that exerted a major influence on Western art. Predominating here are images of actors of the classical Japanese kabukitheatre, proper to the Edo period, of women, particularly geishas (someone educated primarily to entertain) and landscapes. Forty-two prints and five illustrated books are accompanied by three paintings as forerunners of the genre.

3.- Daily Life: The Art of the Urushi Lacquer

In Japan, articles for personal use were traditionally included in general artistic expression, this being a way of ensuring that aesthetics had a place in everyday life. This is the broadest section of the exhibition, displaying an extraordinarily varied range of articles and utensils for personal use. The most outstanding feature of the objects on display is the urushi lacquer, a varnish that fascinated the Portuguese and, later, the Spanish in the 16th century, and which eventually led to what was known as the Namban style, adapted to Western taste. Namban articles were highly decorated with abundant mother-of-pearl inlays.

Particularly interesting in this section are a Namban-style writing desk, a coffer, a table, 38 boxes, 29 inro(a small case with several compartments, usually for medicines, tobacco or personal stamps, which men hung from the belt of the kimono), 17 netsuke(a sort of stopper tied to a string in turn knotted to the inro, and used to hang all kinds of small objects from the kimono belt) and 7 kiseru-zutsu(pipe-cases). Although made using different techniques, the articles all sought the same end, one proper to Japanese culture: to bring beauty to everyday objects. 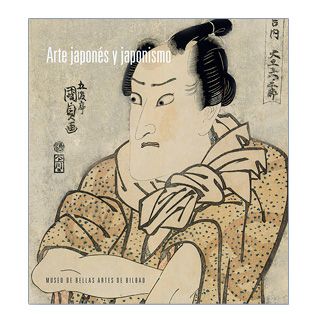 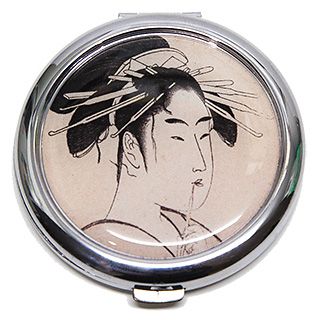 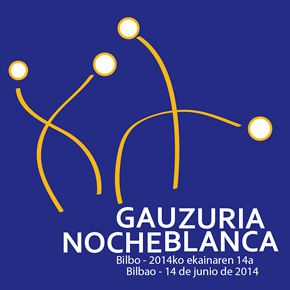 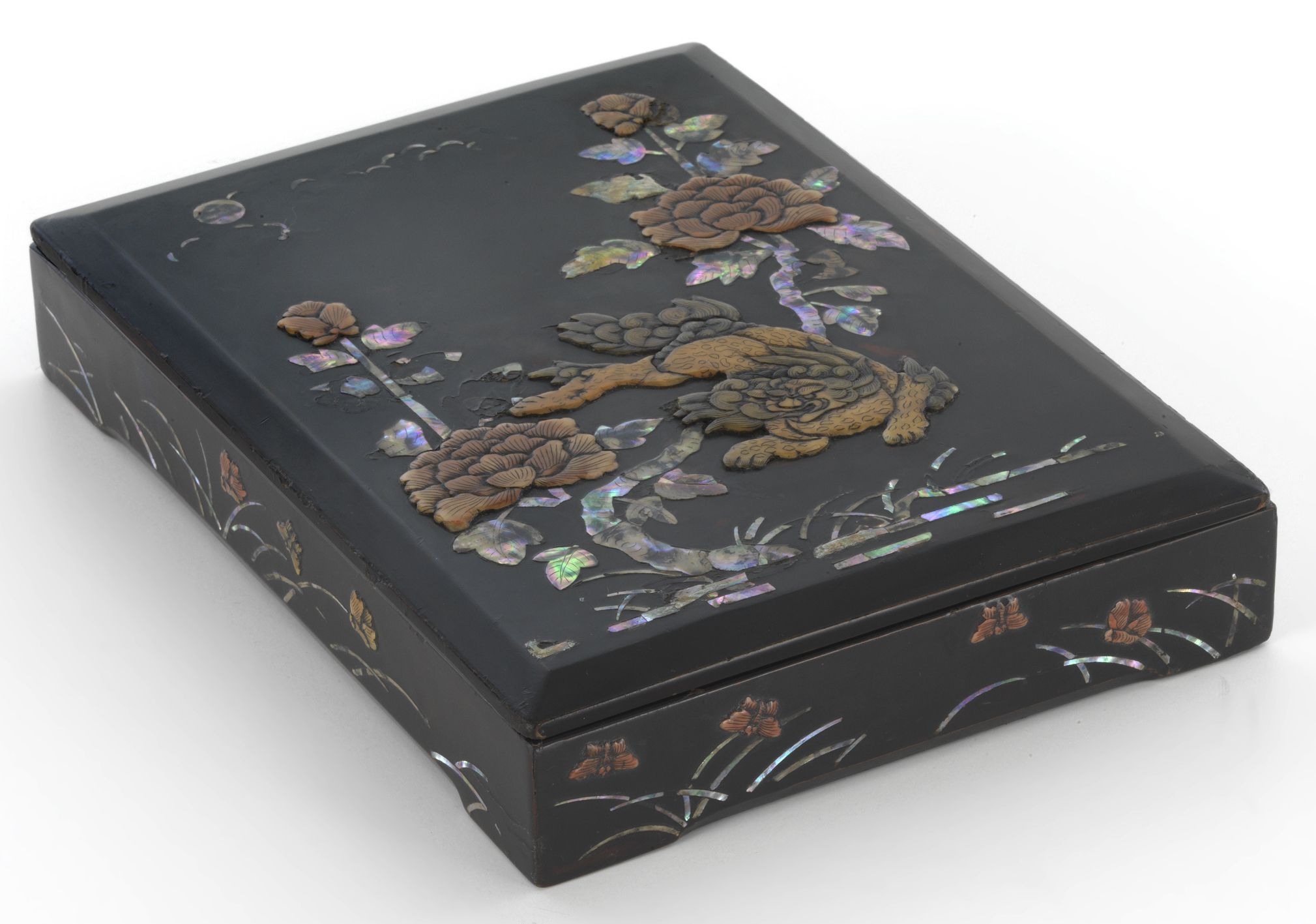 Writing with a brushActivities for families

Minamoto and other adventuresActivities for families 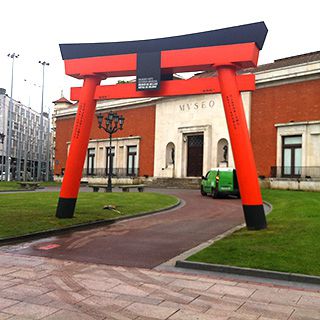