Renoir: Intimacy is the first retrospective exhibition in Spain to be devoted to the French Impressionist painter Pierre-Auguste Renoir (Limoges, 1841-Cagnes-sur-Mer, 1919). It was shown at the Museo Thyssen-Bornemisza in Madrid last autumn, curated by its artistic director Guillermo Solana, and is now on display at the Bilbao Fine Arts Museum until 15 May thanks to the sponsorship of BBK.

In Bilbao the exhibition comprises 64 works loaned by museums and private collections world-wide, including the Musée Marmottan Monet and the Musée Picasso in Paris, the Art Institute of Chicago, the National Gallery, London, the Metropolitan Museum of Art, New York, and the Museo Thyssen-Bornemisza itself.

The selection of works on display aims to emphasise a characteristic feature of Renoir's style which persisted throughout his career, namely the importance he placed on the tactile values of painting. In this respect the filmmaker Jean Renoir once said of his father: "He looked at flowers, at women and at the clouds in the sky as other men touch and caress." As a result, and in contrast to purely visual Impressionism, Renoir's canvases highlight sensory aspects relating to touch, such as his models' skin and hair or the dense foliage of a garden. This aspect is evident in all the genres in which the artist worked, from portraiture to nudes, group scenes, landscape and still life.

The exhibition also focuses on another characteristic that is particularly evident in all the numerous portraits painted by the artist and which differentiates Renoir from the other Impressionist painters: his constant quest for empathy between the model and the viewer. In order to achieve this, his compositions focus on the subject depicted while inviting the spectator to enter into scenes belonging to a private realm. The arrangement of the exhibition enables visitors to appreciate how Renoir made use of the suggestion of volume, material or texture to recreate scenes of an intimacy that acquires not just an erotic but also a social character or one based on ties of friendship or family.

The result is the unique atmosphere to be found in Renoir's compositions and the delicate sensuality of his brushstroke, which succeeds in establishing a close connection between the viewer and the work. It was not by chance that the artist recommended seeing his paintings from close up and made use of visual devices such as the foreground or an exchange of gazes in order to involve the spectator in the scene. Renoir always rejected the Impressionist dogma that imposed a sufficient distance between the viewer and the painting in order to construct the final image on the retina through the optical combination of the brushstrokes.

The structure of the exhibition

Although Renoir's name evokes images of groups of figures enjoying their leisure hours outdoors, much of his work focuses on scenes taking place in private spaces: a figure walking in a garden, a woman playing the piano, two girls reading, etc. The painter's son Jean Renoir defined this approach in the following words: "He didn't paint his models seen from the outside, but rather identified with them and proceeded as if he were painting his own portrait." The first section of the exhibition introduces the viewer to Renoir's pictorial world, with four female portraits painted between 1864 and 1872.

This section includes works from the 1870s which reflect Renoir's most Impressionist facet, making use of a surprising range of stylistic resources. Works on display include the flower-filled landscape loaned by the Museo Thyssen-Bornemisza in Madrid, the fully Impressionist Woman with a Parasol in a Garden, and a preparatory study for the famous Le Moulin de la Galette. Visitors can also see exceptionally important portraits such as that of Monet and his wife, loaned from the Musée Marmottan in Paris, and Woman at the Piano from the Art Institute of Chicago.

The Third Impressionist Exhibition of 1877 was the last in which Renoir took part. From that date onwards he distanced himself from the group and, without entirely abandoning the Impressionist technique, embarked on a reformulation of his style which involved references to the classical tradition and the presence of a more marked interest in drawing in his compositions. He thus looked for inspiration to 18th-century painting - Fragonard, Watteau and Boucher - to the Renaissance - Michelangelo and Raphael - to Titian and Rubens in the case of his bathers, and to other 20th-century artists such as Bonnard, Matisse, Modigliani and Picasso.

From the late 1870s and over the following decade Renoir aimed to achieve recognition in his commissioned portraits, particularly those of women and children, and he became one of Parisian society's most sought-after portraitists. This section includes some of the most celebrated portraits painted by the artist over the course of three decades, notably the series on the Durand-Ruel family and the portrait of Mme Thurneyssen and her Daughter. Displayed here in a subsection entitled Everyday pleasures are paintings of women, either alone or in groups, generally young and located in interiors, all concentrated on an activity such as music, reading or their toilette, which means that they are oblivious to the viewer. In works of this type Renoir introduces the viewer into a private world which he invites us to contemplate.

Landscapes of the north and south

In contrast to most of the Impressionists, Renoir was primarily a painter of the human figure, for which reason his small-format landscapes represent a field for experimentation with colour and pictorial handling. This section bring together views of Normandy and its surroundings, such as Hills around the Bay of Moulin Huet, Guernsey, loaned from the Metropolitan Museum of Art in New York; the Côte d'Azur and Provence, where he depicted the same motifs as his friend Cézanne, including the iconic Mont Sainte-Victoire; and views of his own property Les Collettes where he spent his final years. Also on display are views of different places in Italy, including the bay of Salerno.

The family and its immediate circle

From the time of the birth of his son Pierre in 1885, family subjects and domestic scenes account for much of Renoir's output. This section includes images of his wife Aline, including the pastel Mother and Child, of his two children when very young, such as Coco eating Soup, and the major portrait of his teenage Jean inspired by Velázquez's Prince Baltasar Carlos in Hunting Dress, which Renoir had admired in the Museo del Prado in 1892. We also see other women close to the family circle such as the nanny Gabrielle, who would become one of Renoir's favourite models, and Dédée, who married Jean Renoir after the artist's death.

From the outset of his career the female nude became one of the central themes in Renoir's painting. Associated with the academic tradition, this genre was not particularly suitable for conveying the Impressionists' pictorial concerns and with the exception of Degas they rarely depicted it. Renoir was the first to do so, for example in A Nymph by a Stream from the National Gallery in London. Subsequently, as he moved away from Impressionism in the 1880s, the importance of the nude would increase further. Renoir's late nudes are not easy to classify. It has been said that he aspired to fuse the female body with nature, but some of his nudes are set in interiors. Another aspect singled out is the timeless nature of his bathers, but some are accompanied by modern dresses and hats. What is clear is that these figures, with their small heads and large, disproportionate and monumental figures, emulate Michelangelo, Titian and Rubens, arousing the admiration of Bonnard, Matisse, Modigliani and Picasso, who owned Bather seated in a Landscape, called Eurydice. 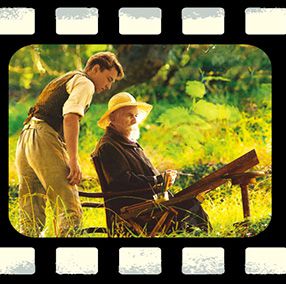 Film cycleFilm classics about the painter and his time 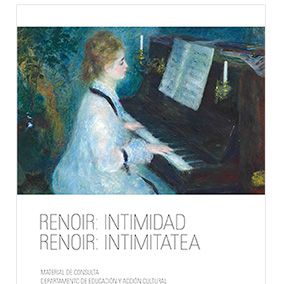 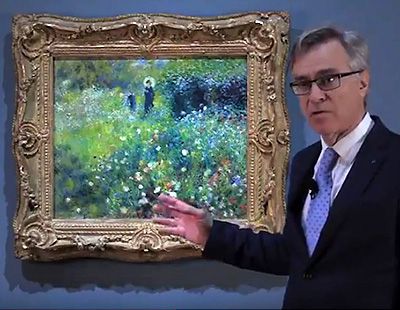 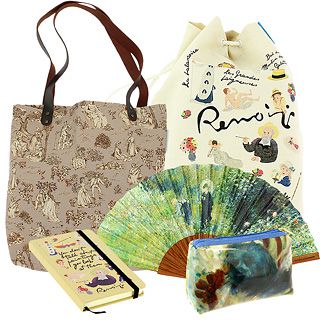 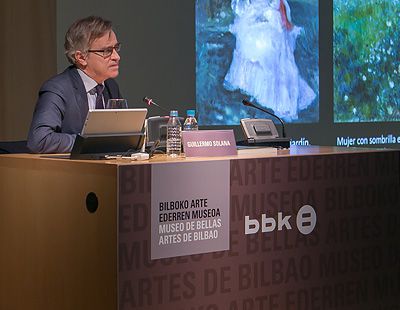