Sponsored by the Banco Santander Foundation, the first edition in 2015 of The Guest Work programme at the Museum presents a sculpture by Cristina Iglesias. Born in San Sebastián in 1956, Iglesias is a highly acclaimed artist whose work has won international recognition. This particular work, now in the Banco Santander Collection, was finished in 1990. As in other works by the artist, light is an essential feature here, and in this instance is particularly favoured by the material used. Delicate and translucent, alabaster draws and projects the glow of external light to create an exquisitely understated physical setting. This is precisely why the work is not shown in the Museum rooms, but rather in the glass-covered area at the intersection of the old building with the more modern one, where there is enough natural light to enhance the expressive qualities of this generously proportioned work (90 x 198 x 80 cm).

After beginning her studies in Chemistry in San Sebastián, and transferring to drawing and ceramics in Barcelona, Cristina Iglesias moved to London to continue art training at the Chelsea School of Art (1980-1982). On her return, her career as sculptress took off quite spectacularly, and in 1999 she won Spain’s National Award for the Visual Arts. She has taken part in the most prestigious international art fairs and exhibitions and showed her work at the Spanish pavilion at the Venice Biennale in 1986 and again in 1993. She has also received many public commissions, including Door-Threshold (2006-2007), which acts as the point of access to architect Rafael Moneo’s expansion of the Prado Museum in Madrid, Midnight Compass, for the Basque regional government building in Vitoria (2008) and the recent installation (2014) Three Waters in Toledo,to commemorate the fourth centenary of El Greco’s death. In 2013 Madrid’s Queen Sofia National Art Centre Museum staged a major retrospective called Cristina Iglesias: Metonymy.

From her earliest work featuring concrete and resin, to the celosías (latticeworks), hanging ceilings and fountains she is currently exploring, Iglesias has produced an oeuvre of sculptures, installations and interventions in country and urban surroundings of a marked personality, attending to the physical characteristics of the components she uses and to other less tangible qualities such as light and space. Each detail is meticulously thought out, drawn and executed, in a creative process that focuses on the texture, weight and colour of iron, cement, zinc, glass, alabaster, wood or water, and on how the corporeal nature of the often ample works occupies and acts on space.

In Cristina Iglesias’s works, architecture and nature overlap, while absorbing theoretical ideas and precepts from the Baroque, Land Art, Minimalism and even Islamic art, although without making explicit reference to such influences. The artist has thus created a poetics of her own, one that embraces the spectator. Her works may provide spaces for those interested to linger awhile,  or afford somewhere to walk through. In others, as in this case, she creates ephemeral shelters fleetingly delimited by light.

In Untitled, Cristina Iglesias employs a functional, architectural feature: a curved pentice which, from the plane of the wall, projects outwards to where the observer stands. The pentice creates a space spectators can explore, somewhere they can look around and up to glimpse the light through alabaster plates. The movement towards the interior of the sculpture and the resulting experience is what the artist is looking to provide; as she says, the idea is “to construct a place where the experience of being there is meaningful, significant”. Cristina Iglesias designs spaces that facilitate emotions. These works placed against the wall break with the traditional arrangement of the “sculpture as statue”, as a solid vertical body on a pedestal that can be walked around and observed from all sides. In this kind of work, however, the sculpture is set away from the centre, at the edge of the gallery. The work stands as a form without mass, floating and light-filled, like other projects where the artist creates canopies or entire roofs hanging in the void.


From her earliest works in the 1980s, Cristina Iglesias has been exploring such marginal spaces with pieces in cement and iron hanging or leant against the wall. Later she upped sizes to build sculptures owing a great deal to architecture while preserving a human scale. She works with a variety of materials, including wall hangings, glass, cement, iron, aluminium, silkscreen and alabaster, in her search for different ways to materialize her ideas, discover colours and textures, to give forms a powerful, tactile feel. Alabaster, on its own or in association with cement, is a central feature of much of her work from the 1990s. It is luminous, and its translucent quality was used in the oldest Romanesque churches in small windows opened in the thick walls. A faint light pierces this sculpture which, paradoxically, is both a protective covering and a thin membrane, with its veining, its beauty and its fragility. 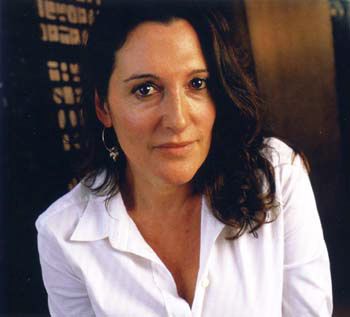 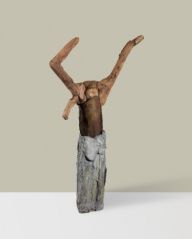