William Tucker (Cairo, 1935) was a pioneer of the minimalist movement in Europe and is today one of the most highly acclaimed artists on the international scene. His work marks a return to figurative sculpture, albeit filtered by a personal interpretation based on organic simplicity and focused on issues of mass and scale. He is also a renowned teacher of art history, and in 1974 published The Language of Sculpture, now regarded as an essential guide for scholars of contemporary sculpture.

Tucker has staged one-man exhibitions at major venues like the Whitechapel Gallery (1965), the Tate Gallery (1971 and 1987), the Serpentine Gallery (1973), the Arts Council of Great Britain (1973) and Tate Liverpool (2001). In 2010 he received the International Sculpture Center's prestigious Lifetime Achievement award.

This, Tucker's first-ever show in Spain, sponsored by the BBK, features more than one hundred works dating from the mid-1980s and the early years of the new century, selected by exhibition curator professor Kosme de Barañano: 12 large-scale and 12 medium-sized sculptures plus 24 models for his large outdoor works that set his entire output into context. Also on show are 57 large drawings from the last thirty years of his career, which will help visitors to understand how he goes about creating his works. Tucker already has an outdoor work in Bilbao, a 3-and-a-half ton, 3 metre-high bronze called Maia (1997), which has been sited on the Abandoibarra pathway since 2002.

Despite the apparent abstraction of his works, Tucker in fact revises the classical themes of mythology and art history, including human and animal heads, torsos, and feet, expressing a vision that emphasizes the energy of the material used in sculpture. He works in a sequence begun by other early 20th century sculptors like Auguste Rodin (Paris, 1840-Meudon, 1917) and Medardo Rosso (Turin, 1858- Milan, 1928).


The son of British parents, William Tucker was born in Cairo in 1935, although he was taken to England when he was just two years old. He studied History at Oxford University from 1955 to 1958, and after seeing an exhibition called Sculpture 1850 to 1950 in London in 1957, decided to follow his own calling as a sculptor.

In the following years he studied Fine Arts at London's St. Martin's School of Art under influential sculptors Eduardo Paolozzi and Anthony Caro. In 1961 he became a recipient of the prestigious Lord Sainsbury Scholarship grant, and in 1965 he was awarded the Peter Stuyvesant Travel Bursary. Years later he taught at both St. Martin's and Goldsmiths College, also in London, and in1968 he was elected Gregory Fellow in Sculpture at Leeds University, where he embarked on a series of lectures on sculpture that would later form the core of his book The Language of Sculpture (1974).

In 1972 Tucker represented Great Britain at the Venice Biennial  where he showed some abstract sculptures involving great lines of metal, which he used to express his rejection of the narrative values of figurative sculpture and allowed him to explore the essence of sculpture.
The following year he became the first artist to stage a one-man show at the Serpentine Gallery in London, set up shortly before as a kunsthalle for contemporary art by the Arts Council of Great Britain. In 1975, the Arts Council asked him to curate an exhibition called The Condition of Sculpture, at London's Hayward Gallery. For the show, Tucker selected works by sculptors who, in line with his own artistic interests, preferred geometrics to the organic and made use of new industrial materials like glass fibre and plastics that were remote from the classical media of sculpture.

In 1978 he set up in New York to teach at Columbia University, where he remained until 1982, and at the New York Studio School. In 1981 he was awarded a Guggenheim Fellowship for Sculpture and began to work on a new direction in sculpture, one that involved the original principles of the art: verticality and modelling. Tucker, who had been one of the pioneers of the Minimalist movement in the UK, was now returning to figurative sculpture, although this return was in line with his own vision that tended to simplify volumes with organic properties. In 1986 he was given American nationality and a grant from the National Endowment for the Arts.

In 2010, the United States' International Sculpture Center honoured Tucker with its prestigious Lifetime Achievement award. Today Tucker's sculptures can be found in the world's leading collections, including London's Tate Gallery, the Guggenheim and MoMA in New York, the Nasher Sculpture Center in Dallas, the Museum of Fine Arts, Houston and the Art Gallery of New South Wales in Sydney.


Tucker. Figure & Mass is a non-chronological overview of the last thirty years of the artist's career, from 1985 to the present day. Featuring both sculptures and drawings, it is designed to spotlight two ways of approaching modelling and of expressing the sculptural character of any surface. The exhibition is the first-ever retrospective of the artist's work in Spain and the first time so many of his drawings have been shown with his sculptures. This pairing seeks to give the spectator an insight into the intellectual and formal keys of Tucker's body of work.

This is not, however, the first time Tucker's work has been shown at the Bilbao Fine Arts Museum. Back in 1962, in the company of artists like Anthony Caro, John Latham, Brian Wall and Philipp King, he took part in an exhibition organised by the Arts Council of Great Britain entitled Young English Sculpture. At that time Tucker was exploring the artistic possibilities of glass fibre and giving priority to line over mass and to geometry over the organic. But from the early 80s, and after having consolidated his position as one of the Minimalists of the New British Generation, he began to take an interest in volume, in solid mass, and in modelling plaster by hand as a means of exploring the fragmentary forms of living beings: heads of men and horses, hands, feet, dancers and torsos.

And it is precisely this period that Tucker: Mass & Figure concentrates on. The exhibition reflects the sculptor's primordial interest in volume, in the return to figurative sculpture that has its roots in prehistoric art, to which Tucker brings a new vision by simplifying forms in a search for their essence.

The exhibition kicks off with three large sculptures from a decade ago, including The Cave (2005), sited on Bilbao's high street, the Gran Vía, hard by the head offices of the BBK. The Cave is a clear nod to José Saramago's novel La caverna (The Cavern), whose central character is a potter.

In the Museum itself are Night (2004), which evokes Michelangelo's Night in the Medici chapel in San Lorenzo, Florence, and The Void (2005), associated with Giacometti's Hands Holding the Void. Like torsos, these bronzes of hands are a fragment of the human anatomy in an autonomous work. They are closely related to the history of Western sculpture and with signature works by Michelangelo and Auguste Rodin. Backing this vision is the bronze Ouranos, from 1985.

We continue with the head Homage to Rodin (Bibi) (1999), a theme Tucker repeats on a larger scale in works such as The Hero at Evening (2000) and Emperor (2002). Several of these enlarged heads cast in bronze or done in concrete have become monuments for public spaces.

After this first approach to hands and heads, there is a gap that leads to three vertical masses placed without a plinth directly on the floor and which represent the forces that symbolize life and death. All three works are from 1985 and bear the names of classical Greek gods: Tethys, Kronos and Rhea. Tucker takes names from Greek mythology to define these primordial forms before myth had infused them with specific attributes to delineate general forces like the ocean, time and the earth.

Further on are three large, very recent pieces not yet cast in bronze. They are three plasters with differing textures and colouring: Chimera (2008), inspired by a Brancusi plaster, Odalisque (2008) and Day (2012). Viewing these studio sculptures could well provide spectators with clues to the way Tucker works, while bearing witness to the difficulty of modelling on a large scale and the subsequent challenge of casting such works

Following the time sequence we come to four heads from 1998, Our Leader, Good Soldier, Persecutor and Sleeping Musician, several horses' heads from 1986 with the generic title of Horse, and three models for Boston: Greek Horse, Chinese Horse and Day. Scarcely measuring 10 centimetres, they help us to understand the artist's sense of scale.

The exhibition continues with the model for Maia, dating from 1997, a sculpture Tucker produced for the Abandoibarra pathway in Bilbao in the same year, and which represents a female torso springing from the earth, dense and primitive, to evoke potential fecundity, an idea also found in Eve (1991) and Demeter (1998). Finally, two plinths have been installed bearing working models used by the artist between 1991 and 2011.

On exhibit throughout are large pencil, charcoal, ink and black chalk drawings, and monotypes (prints produced singly) that give Tucker the chance to explore themes in parallel to his sculpture. The artist stands as he draws on a piece of paper pinned to the wall, which leads to a result similar to a frontal relief that captures the energy of its creator.

In all these works Tucker, following a path first taken by Rodin, eschews the kind of sculpture that seeks to monumentalize the human figure and make the representation of a theme its raison d'être. His work also reviews the history of mythology and themes found in the history of art. Tucker's sculptures are enigmatic volumes that the spectator has to discover from more or less recognisable traces or signs or from his knowledge of literary references or of art history.

They are physical presences, masses where the sculptor's hands model in plaster or clay and trace incomplete gestures that make up a surface with the deliberate ambiguity of the non finito. Although all appear to be abstract, a closer look reveals they are actually heads, torsos or hands with a monumental quality and a changing profile that obliges the spectator to move around them and relate to them not only visually but also bodily. As Kosme de Barañano says in the essay he has written for the exhibition catalogue, William Tucker's sculptures "are primordial masses teetering on figuration, like large meteorites fallen to earth".


Irudian:
The Cave, 2005
Courtesy of the artist. Pangolin London 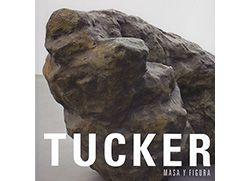 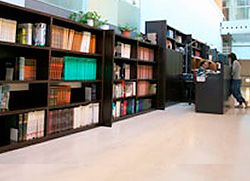 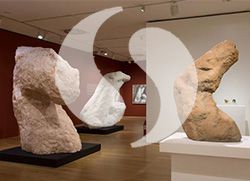 Exhibition in the mediaSpotify timeline (spanish)