The Sermon of Saint John the Baptist

2014 sees the 10th anniversary of the Banco Santander Foundation’s sponsorship of the Guest Work programme. Some fifty guest artworks have been presented in the 44 editions of the programme held over the last ten years. The Banco Santander Foundation has also contributed on occasion to the Programme by loaning major works from its own collection. This is true in the present case, involving a painting by Lucas Cranach the Elder entitled The Sermon of Saint John the Baptist, dating from around 1537-1540. The painting is now on display in room 6, together with Lucretia, a signed work by the same artist from 1534, which the Museum acquired in 2012. So on this occasion the programme brings together two very different works by the same artist, greatly enhancing the original initiative: one painting has an evangelical theme by no means frequent in Cranach’s production, while the other is a nude study of Lucretia, one of the artist’s favourite subjects. Indeed, it was so much to his taste that, either on his own or with help from members of his workshop, Cranach produced  upwards of sixty versions of the same theme.

A painter and engraver, Lucas Cranach the Elder (Kronach, Germany, 1472–Weimar, Germany, 1553) is one of the world’s great artists and, with Albrecht Dürer, a leading figure of the German Renaissance. His adopted surname comes from his birthplace, the small German city of Kronach (Franconia), where his father taught him the rudiments of his craft. A fervent enthusiast of the Protestant Reformation, he was a close friend of Martin Luther, for whom he painted educational religious works and several portraits. He also created his own ideal of the female nude, which remains attractive and alluring even today.

Little is known of his early years, although he is recorded as being in Vienna in 1502 or thereabouts. The atmosphere revolving around the university there had a great influence on Cranach, who soon assimilated humanistic ideals. In 1505 he was in Wittenberg, where he remained until 1550, on being appointed court painter to the elector Friedrich III. There, continuing in the humanistic mode, he worked as a painter and engraver while also organizing guilds, supervising architectural projects, overseeing ceremonies and taking responsibility for the general aesthetic feel of the court. As burgomaster of the city, he was also the proprietor of a bookshop and an apothecary shop, launching a number of other business initiatives that brought him prosperity and social status.

In 1508 he went on a diplomatic mission to the Emperor Maximilian’s court in the Netherlands. At this point an appreciable shift in his painting occurred towards much more smoothly modelled figures. From 1520 commissions flowed into his busy workshop, where his sons Hans and Lucas Cranach the Younger both worked. Besides religious themes and portraits, the workshop produced many works on classical and mythological themes. In the last years of his life Cranach accompanied the Elector John Frederick I into exile, first to Augsburg and then to Weimar, where he died in 1553. A versatile, prolific artist, Lucas Cranach the Elder left a large body of paintings and engravings, and a workshop that survived him and continued to create versions of his works decades after his death.


Lucas Cranach, from the German region of Upper Franconia, started using a winged serpent or dragon as a signature in 1508, taking it from the coat of arms he was awarded by Frederick the Wise, Elector of Saxony, for whom Cranach worked in Wittenberg. He painted the serpent with upraised wings until 1537, the year his eldest son, Hans, died. Cranach expressed his immense sadness symbolically by painting the serpent with its wings lowered to the horizontal. Even so, the creature continued to figure on Cranach’s paintings as a genuine trademark.

Cranach’s way of working was in fact quite unusual. Until around 1530 he produced original paintings, most of which were subsequently engraved. From then on, to satisfy growing demand, he began to repeat his more successful themes like Adam and Eve, Venus, Lucretia, Judith, the Judgement of Paris and nymphs at the fountain, over and over again, using the original paintings, sometimes with slight variations, or old segments and motifs re-assembled or moved around to different effect. To produce the huge number of paintings required of him, Cranach sought the help of his son, also called Lucas, born in 1515, and of other workshop members, actually identified by name. Bearing in mind how old Cranach was by then, it seems highly unlikely he had much to do with the production side of the business, particularly after Hans’s death.

Although this panel has been dated to the period between 1518 and 1520, the serpent with lowered wings forcefully suggests that it was in fact produced after 1537. In the Friedländer and Rosenberg catalogue, the classic work of reference on the painter, no mention is made of any panel illustrating this particular theme. The authors do cite a Saint John the Baptist auctioned in Berlin in 1902, but not one illustrating the passage where he preaches. More interesting is a woodcut dated 1516 on this theme, made from a lost original. A good number of variations are made in the portrayals of the people listening to the sermon. In any case, it is clear Cranach very rarely drew on this particular Evangelical passage for inspiration, which heightens the panel’s appeal.

One unusual feature of the painting is the improvised pulpit used by Saint John to preach from, a lopped tree trunk with a crossed branch in front acting as a barrier to prevent him from falling forwards. The Baptist is preaching to a congregation of ten stood before him and three knights in the background, all arranged in a kind of funnel shape. The unrelieved green of thick trees and turf fills the space, in sharp contrast to the colourfully dressed figures, men and women who listen attentively, mulling over what John is saying.

Similarities to other works by Cranach are not easy to find. At most one might point to the knights’ armour or their horses, the leaves on the trees and perhaps also the clothes of the standing congregation, although there is something rather rigid about the vertical folds of their robes. The ornamental nature of the piece, largely determined by the composition and the colour arrangement, together with the fragility of the figures, rather weak of line in some places, suggest that this painting was produced by members of the workshop under the Master’s direction.

Content of exhibition: The Sermon of Saint John the Baptist 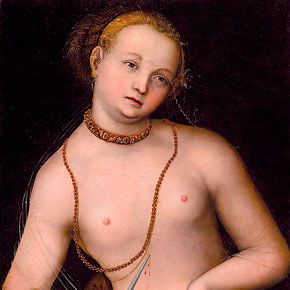