First launched in 2001, the Guest Work programme presents artworks on temporary loan from other institutions that are infused with new life and meaning by being displayed in the context of the Museum’s permanent collection. The Banco Santander Foundation has sponsored this initiative since 2004, and its generosity has enabled the Museum to organize several Guest Work loans every year; the Foundation also occasionally provides artworks from its own collection. There have now been 43 editions of the programme to date (including this latest loan), which have given visitors to the Museum the opportunity to view 50 artworks in this unique format. Guest Work loans have included artworks by Berruguete, Morales, Van Dyck, Tintoretto, Artemisia Gentileschi, Canaletto, Fortuny, Monet, Sorolla, Picasso, Chillida, Hockney, Freud, Rubens, Turner, Magritte  and, most recently, Friedrich.


The latest edition features a major Basque painting from the early 20th century now in the collection of the Museo Nacional Centro de Arte Reina Sofía in Madrid. Painted by Ramón de Zubiaurre (Garay, Bizkaia, 1882-Madrid, 1969) in or around 1924, The Basque Sailor Shanti Andía, the Bold, is a work of monumental proportions.
A painting of considerable artistic appeal, The Basque Sailor Shanti Andía, the Bold was inspired by the illustrations Zubiaurre did for a novel by Pío Baroja (San Sebastian, 1872-Madrid, 1956) Las inquietudes de Shanti Andía, (literally, The Concerns of Shanti Andía), first published in 1911. This mature, middle-period novel was the first of the author’s extensive production to take the sea as its theme. Also entrusted with doing illustrations for the new edition of the novel in 1920 was painter and engraver Ricardo Baroja (Minas de Río Tinto, Huelva, 1871-Vera de Bidasoa, Navarra, 1953), author Pío’s brother.
Now on view in Room 31 in the Museum’s old building, the painting can be compared to other works by Zubiaurre that are quite different in tone and aesthetic intent. The contrast gives an idea of the variety of Zubiaurre’s themes and artistic concerns. While The Basque Sailor Shanti Andía, the Bold (c. 1924) is couched in a post-Impressionist idiom, the earlier works Portrait of My Sister Pilar (c. 1911) and The Intellectuals of My Village (c. 1912-1913), both in the Bilbao Fine Arts Museum collection, embody respectively the refined symbolism of a family portrait and popular art seen with the kind of irony to be found in other works by Zubiaurre on similar themes.
Ramón de Zubiaurre received his early training at the San Fernando Academy in Madrid and during a trip to Paris and the Low Countries. After a relatively short-lived period producing landscapes, Zubiaurre turned to the portrait, a genre in which he built up a large clientele after 1910. From 1921, he spent long periods in Argentina and Chile. Although his career and artistic concerns were very similar to those of his elder brother Valentín, Ramón de Zubiaurre is considered much the more daring and modern painter. He exhibited his extensive artistic output with great success in Spain, Europe and America.


Ranked among the best-known works by Basque artist Ramón de Zubiaurre y Aguirrezabal (1882-1969), The Basque Sailor Shanti Andía, the Bold in 1924 won for the painter the First Class Medal at the National Fine Arts Exhibition in Madrid, one of the most important awards he ever received, and certainly one of the most highly prized by his fellow artists. The award entailed the painting becoming part of the collection of Madrid’s old Museum of Modern Art; the work was subsequently inherited by one of the old museum’s present-day heirs, the Museo Nacional Centro de Arte Reina Sofía.

The approximate date of The Basque Sailor Shanti Andía, the Bold, on view at the Bilbao Fine Arts Museum, owes a great deal to Ramón de Zubiaurre’s acceptance, in 1920, together with Ricardo Baroja, of a proposal to provide the illustrations for a re-edition of a well-known novel by Ricardo’s brother Pío Baroja, entitled Las inquietudes de Shanti Andía (literally, The Concerns of Shanti Andía), first published in 1911. Possibly with an eye to compensating the rather bland, black-and-white format used for the prints illustrating the novel, Zubiaurre decided to paint this powerfully coloured work of almost mural-like proportions.

In painting the work, Zubiaurre chose to emulate the primitivist aesthetic favoured by French Post-Impressionists like Gauguin and the Nabis. He presents us with a sculptural, petrified image of an experienced sea-wolf, whose eyes and general expression inevitably bring to mind the characters found in many of his paintings of popular scenes. Zubiaurre was profoundly deaf, and this drawback left its mark on the way he interpreted and portrayed bodily gesture in his art.

Divided into two parts by a diagonal interrupted only by the pointing, Columbus-like arm of the main character, the painting is made all the more powerful by the efforts of the crew to keep the vessel’s sails upright against the sea’s impetuous buffeting. The warmth of the colours of the clothes worn by some of the sailors, including Shanti himself, balances the blue and green tones prevailing in the painting’s other visual components, particularly the menacing waves. These colours may well play a symbolic role for Zubiaurre, whose deeper interest seems to lie in portraying mankind’s heated struggle against the stark coldness of Nature.

The scene may refer to some specific passages in the novel, possibly the chapter called “La Tempestad” (The Storm), where the central character, living up to the nickname of “the Bold” the painter bestows on him, sets out to sea while a storm is still raging. Despite such a tragic situation, Zubiaurre still manages to convey in the painting the Basque sailor’s epicurean personality. Early on in the book, Andía defines himself in unmistakeable fashion: “According to the folks at home, my apathy is of a quite extraordinary type, Squalls, storms, lightning, thunder: nothing has ever managed to shake me out of my habitual passivity”.

Content of exhibition: The Basque Sailor Shanti Andía, the Bold 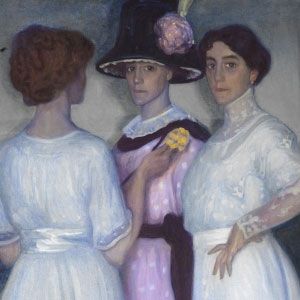