The Artist at Court. Giandomenico Tiepolo

and the Fantasy Portrait

Giambattista arrived in Madrid in 1762 on the invitation of King Charles III, principally to paint a number of ceilings at the Royal Palace, including the ceiling of the Throne Room. With his sons as assistants, he received further commissions until his death in Madrid in 1770, at which point Giandomenico decided to return home to Venice.

During his time in Spain, besides helping to paint frescoes Giandomenico produced a number of easel paintings and works on paper. A choice selection of these works is now on display in rooms 13, 14 and 15 of the old Museum building: eleven oil-on-canvas paintings and a dozen etchings. The works included were selected by exhibition curator Andrés Úbeda de los Cobos, head of Conservation of Italian and French Painting (to 1700) at the Prado in Madrid. In recent years Úbeda de los Cobos has done valuable work in clarifying the personalities and artistic qualities of Giandomenico and Lorenzo, so often overshadowed by their acclaimed father.

Ten of the paintings come from a private collection and were presented to the public for the first time at the Juan March Foundation in Madrid in 2012. To this original group another, Portrait of an Old Man with Sword, has been added for the present exhibition. The existence of this new arrival, now in the collection of the Casa-Museu Medeiros e Almeida in Lisbon, was formerly known only from photographs. The prints, eleven by Giandomenico and one by his father, were lent by the Biblioteca Nacional (National Library) in Madrid and are intended to highlight their relation to the paintings.

This connection is particularly clear in the sequence formed by the oils Portrait of an Old Man with Sword, from Lisbon, Portrait of a Man Wearing a Turban, from a private collection, and the print entitled Old Man with a Sword, also by  Giandomenico. He first painted the portrait of the severe-looking old Oriental with a sword in his hand and a kerchief on his head now in the Casa-Museu Medeiros e Almeida collection. Shortly afterwards he made the engraving of the painting, reversing the image in the process and bringing the subject into the foreground. Years later, in 1768 or thereabouts, he reproduced the print on canvas for the painting now in a private collection. Here, the subject is portrayed in the same position as the print, the hand holding the sword has disappeared and the kerchief has been replaced with an eye-catching turban.

Strictly speaking, these paintings are not genuine portraits. They are instead what are known as "fantasy portraits", which are basically an historicist-tinged idealization used to portray generic types. Characters are shown sporting ornate clothes and accessories, adopting studied poses, and are usually given the features and attributes typical of a particular social, economic or intelectual group.

This subgenre of the portrait, which harks back to a long tradition in Venetian painting, was a great success on the art market in 16th- and 17th-century Europe. The female models follow the ideal of beauty found in portraits of courtesans painted by 16th-century artists like Titian or Veronese. The main precursor for the male type, solemn and sumptuously dressed older men, is to be found in the engravings of Rembrandt.

The oil paintings in this exhibition are bust portraits, three of them being of mature, bearded Oriental-looking men, and the other eight of beautiful young women. In the male portraits, the characters are presented in the guise almost of philosophers, of wise, honourable men of Antiquity, while those of the young women seem to cling to an ideal model of female beauty. For the male portraits  Giandomenico made use of models painted by his father in the 1740s.

Giandomenico himself engraved the prints of his father's models, which gives an idea of his influence. That he did so also highlights the differing artistic sensibilities of the two men. Giandomenico gave priority to the decorative side in his painting, distancing himself from the search for verosimilitude or from giving his subjects psychological depth. But where we see the son's creative individuality most explictly is in the female portraits, which he adapted to the strict morality of Madrid society in Charles III's time, muffling their sensuality and presenting an elegant but restrained female beauty that is far removed from the brazenness of his father's models and from other historical precedents.

The private-collection fantasy portraits on show in this exhibition are all of the same size (60 x 50 cm) and date from around 1768. So they were painted during the artist's time in Spain, which suggests they were conceived as a series. The stylistic unity of the portraits also lend support to the group idea; all are painted with the artist's characteristically delicate yet vibrant brushwork. While stylistic unity, the identical size and the similarity in the atrezzo and attitudes of the subjects all point to Giandomenico Tiepolo having conceived them as a set, we don't know who their first owner was, where they were hung or even if all the paintings were actually part of a larger gallery possibly including a repertoire of images of young men.

In the image:Portrait of an Old Man with a Turban, c. 1768
Oil on canvas
Private collection

Content of exhibition: The Artist at Court. Giandomenico Tiepolo 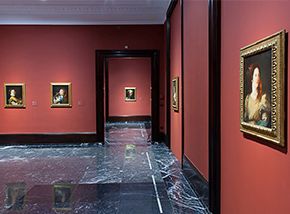