The Arrue Brothers in Paris

The 65th edition of The Guest Work is offering a special artistic encounter with two large paintings by the brothers José (Bilbao, 1885–Llodio, Álava, 1977) and Ramiro Arrue (Bilbao, 1892–Saint-Jean-de-Luz, France, 1971), specifically, Baserritarrak, by José, and Fandango, by Ramiro, They were presented together in Paris in 1925 and since then had been separated until now, when they are being exhibited in the museum’s gallery 33 as part of this programme supported by the Banco Santander Foundation.

This occasion also celebrates the recent donation of Baserritarrak by José Arrue’s family and commemorates the fiftieth anniversary of the death of his brother Ramiro, whose painting Fandango is being exhibited thanks to a temporary loan from the Saint-Jean-de-Luz (France) Town Hall.

The joint exhibition of both paintings provided the chance to conduct research that reconstructs these two works’ participation in the Exposition Internationale des Arts Décoratifs et Industriels Modernes de París de 1925. Its author, Javier Novo, the museum’s coordinator of Conservation and Research, will hold a lecture on Monday 22 November in which he will share the main conclusions of the study, which will help to provide a background on this fascinating episode in the history of Basque art.

With the goal of contextualising the two paintings, they are shown accompanied by other documentary and artistic materials: a reconstruction of the ‘Basque Stand’ where they were exhibited, made from the blueprints conserved in the Departmental Archives of Bayonne (France); a colour lithograph advertising the 1925 Paris International Expo conserved in the museum’s poster collection; and a small set of enamels by Ramiro and Ricardo Arrue (Bilbao, 1889–Caracas, 1978) belonging to the museum’s decorative arts collection and representative of around 50 that were on display in the Spanish pavilion, which won a Gold Medal diploma. 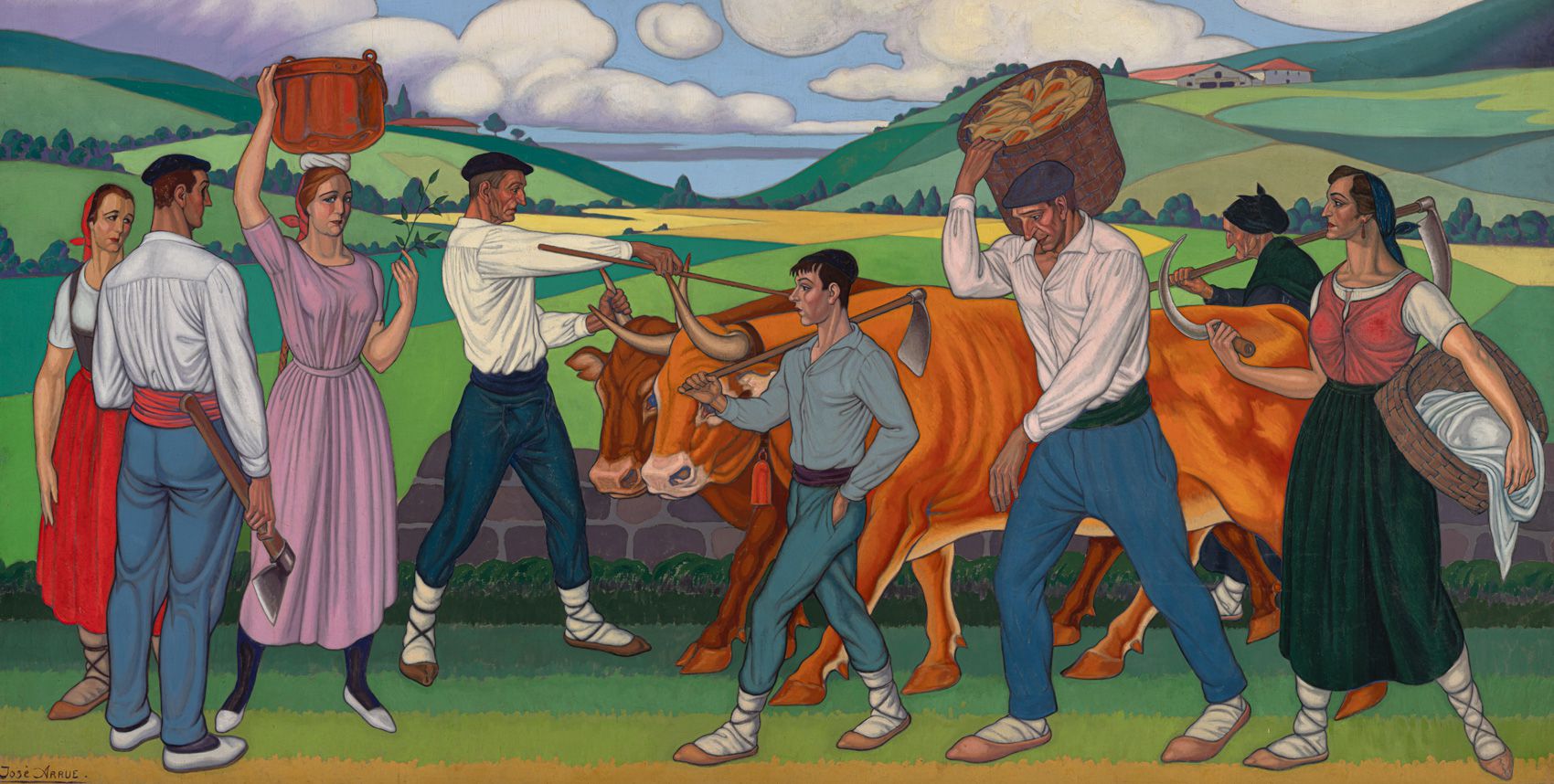 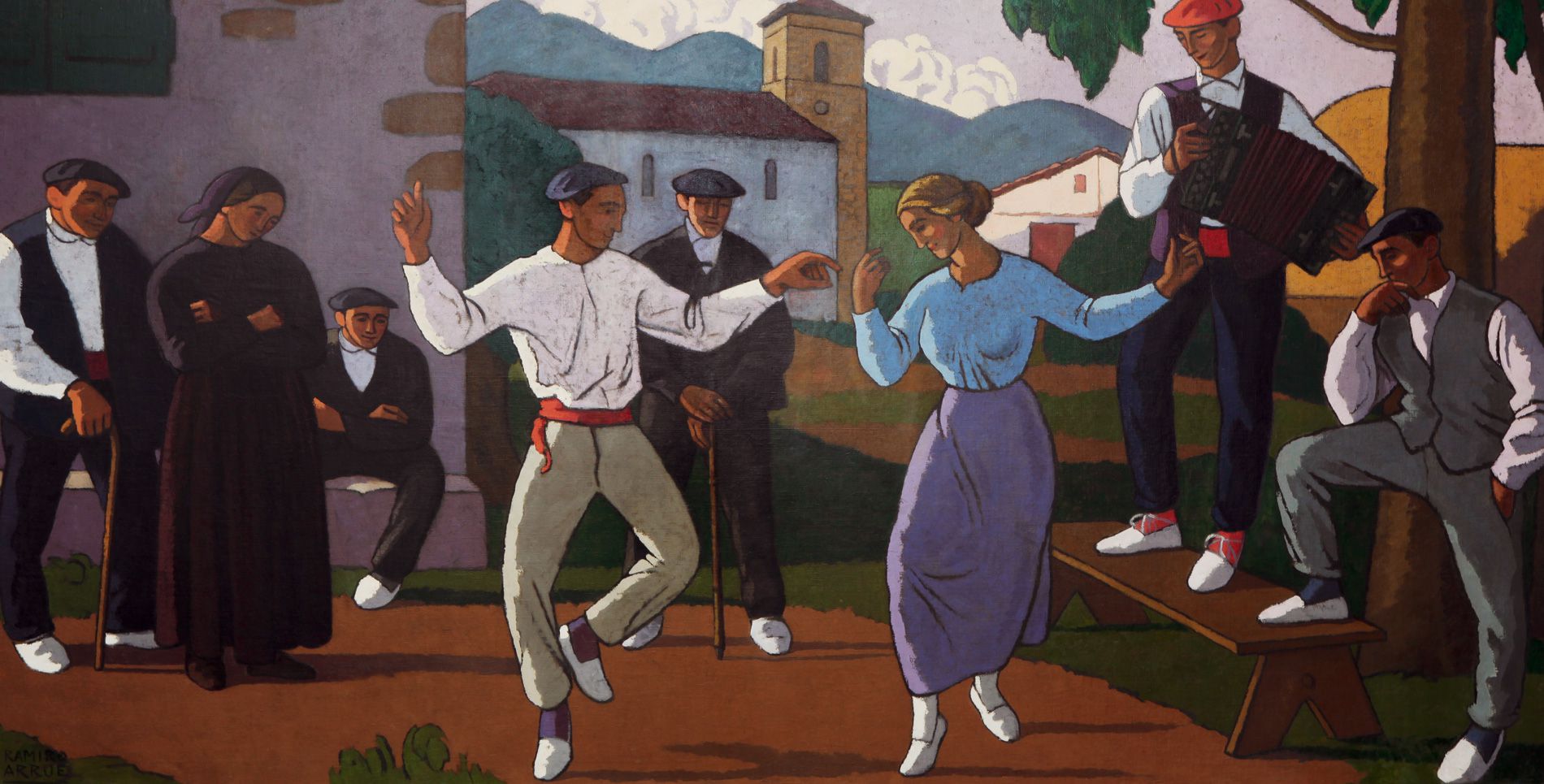 Baserritarrak, by José Arrue and Fandango by Ramiro Arrue were commissioned for the ‘Basque Stand’, the French-Basque section which brought together paintings, sculptures, ceramics and furniture at the 1925 Exposition Internationale des Arts Décoratifs et Industriels Modernes in París.

Held between April and October of that year to enormous public success, the fair was planned with the purpose of showcasing modern architecture by exhibiting the industrial advances and how they were applied to the decorative arts. It was also a key event in the international dissemination of the Art déco style.

The two works by the Arrue brothers won awards at the event and were exhibited in the Hall d'un syndicat d'initiative en Pays Basque, , an ephemeral construction that the architect Benjamin Gomez (Bayonne, France, 1885–1959) built as a tourism bureau to promote the Basque Country at this prestigious international event.

After this event, the two works parted ways. Baserritarrak has been on deposit at the Bilbao museum since November 2003, and fortunately it was recently donated by the artist’s family. Fandango, in turn, is now able to reunite with its counterpart thanks to the work’s current owner, the Saint-Jean-de-Luz (France) Town Hall, which has lent it, aware of the value of seeing these two key works in the Arrue brothers’ oeuvre and in early twentieth-century Basque art together.

The success of José Arrue’s pilgrimages and Costumbrist scenes, which are full of humour, has largely eclipsed the painter’s thematic versatility. However, one of the most prominent facets of his expansive artistic personality is his ability to adapt to different formats and techniques, from gouache to oil painting, murals or stained glass.

Dedicated to the Spanish side of the Basque Country, Baserritarrak captures a country work scene with the light and power that were common in the artist’s works. Because it was originally hung in a high place, it features figures that are virtually life-sized. Just like his brother’s work located at the opposite end of the hall, there was a ceramic plate under it with the legend ‘Biarritz reine des plages. Plage des rois’ (Biarritz queen of the beaches. Kings’ beach) which earned a Silver Medal diploma.

José Arrue (Bilbao, 1885-Llodio, Álava, 1977). He studied in Bilbao at the Arts and Crafts School and in the studio of the painter Antonio María Lecuona, and later in Barcelona with Ramón Casas, where he met the painter Santiago Rusiñol. In 1905, he travelled to Paris with his brother Alberto, and the next year he joined a family journey to Italy. Precisely in 1906, upon his return to Bilbao, is when he began to paint humorous Basque scenes. In 1908, he and Maeztu founded the critical humorous magazine El Coitao, which only had a brief life. Several of his subsequent journalistic collaborations definitively guided his works towards illustration and Costumbrist caricature. Just like his brothers, he held leadership positions in the Association of Basque Artists.

Ramiro Arrue’s large panneaux for the ‘Basque Stand’ reflect the joy of Basque folklore via a depiction of the fandango, one of the most popular dances from Iparralde. The work, which perfectly captures the romanticism, aesthetic synthetism and measured colours that are the hallmark of this artist’s works, was installed on one of the narrow sides of the vestibule on a ceramic plate bearing the legend ‘Le Pays Basque beau tout l’an. Bayonne et ses Musées’ (The Basque Country is beautiful all year round. Bayonne and its museums). With a personality different to his brother José’s work, yet in harmony with the decorations around it, the painting won an award in category 7: Furniture Sets with a Gold Medal diploma.

Ramiro Arrue (Bilbao, 1892-San Juan de Luz, France, 1971). He travelled to Paris in 1907, where he first studied drawing and painting and often visited the sculptors Nemesio Mogrobejo, Francisco Durrio and Antoine Bourdelle and the painter Ignacio Zuloaga. In 1911, he moved to the French Basque town of Ciboure. That same year, he helped to create the Association of Basque Artists, in which he held several leadership positions, as did his brothers. He started living in Saint-Jean-de-Luz when he married in 1929, and he remained there until his death. In addition to being a painter, he was also a set designer and creator of refined enamels along with his brother Ricardo, as well as an illustrator and poster artist

Lecture "The Arrue Brothers in París