For its latest edition and thanks to the sponsorship of Fundación Banco Santander, the "Invited Work" programme is presenting an unusual subject in Room 9: a significant part of the famous Nativity Scene by the sculptor and religious image maker Francisco Salzillo (Murcia, 1707-1783). It has been loaned by the Museo Salzillo (Murcia), to which the Bilbao Fine Arts Museum will be lending in exchange seventeen works on the Christmas theme, to be exhibited with the title Nativitas Domini until 12 February next year.

Comprising around 300 polychromed figures (of the 556, including figures and six architectural structures, that make up the entire work), the Nativity was made by Salzillo between 1776 and 1783 for his fellow Murcian, the aristocrat Jesualdo Riquelme y Fontes, and was completed by his pupil Roque López and his studio. It was finished around 1800 and only one of the six architectural elements is a modern creation. Throughout the entire 19th century it was in the Palacio Riquelme, entering the collection of the Museo Salzillo as one of the key works within Salzillo's oeuvre.


The narrative structure of the Nativity follows various canonical and apocryphal texts in order to establish a chronological sequence that runs from the Annunciation to the Flight into Egypt and in which the figures occupy a predetermined position while the other elements can vary. The scenes include magnificent architectural structures, some copies of buildings of the period when the work was made, such as Herod's palace, which imitates a local Murcian aristocratic residence; Mary's house, which reflects urban dwellings of the time; and Saint Elizabeth's house, which echoes the sophisticated typology of the small rural house. Others, however, employ classical or Renaissance references, such as the ruined portico in which the Birth of Christ takes place, or the Temple of Solomon, based on the Roman church of San Pietro in Montorio. Mary's house retains its Rococo furnishings, which must have been added in the 19th century.

The biblical episodes are acted out by a wide range of picturesque figure types that are also to be found in painting and literature of the day. In this respect, the Enlightenment writer Ceán Bermúdez observed that Salzillo gave lodgings to beggars in his house in exchange for them posing for him.

These popular types co-exist with the solemn figures that act out the religious mysteries, as well as sumptuously dressed angels and nobles. Some of them are portraits of real people of the day, including Riquelme y Fontes himself, the Marquis of Beniel and the Count of Flordablanca.

Despite his Italian origins (his father was an Italian sculptor based in Murcia who ran an important family workshop principally producing religious images), Salzillo's Nativity Scene is notable for its inspiration in popular life and customs, its profound religious sentiment and the narrative character of the scenes.

The figures, which are about 30 centimetres high, are modelled in clay or carved in wood. They have complex polychromy, in some cases applied directly onto the wood using a finely detailed technique that reflects the Rococo tradition. The clothes are made from glue-sized fabric over which the paint, applied with brushes of different thicknesses, creates a range of textures from the softness of silk to the rough clothing of the shepherds. Other techniques, such as the incising of the estofado, add richness to the mantles and tunics of the holy figures. Blue, red and green are the predominant colours, combined with gilding. The angels, such as those present in the Dream of Saint Joseph, are the most sophisticated figures. The work as a whole includes a wide range of clothing, from the plain local jerkin and embroidered skirts to be seen in the Massacre of the Innocents to the gleaming armour worn by the Roman soldiers.

Through these gospel scenes Salzillo offers a fascinating image of the habits and customs of the Spanish peasantry, showing the finest aspects of their dress and their amusements and pastimes such as music and dancing. In this folk universe the rustic shepherds happily co-exist with the sophisticated local nobility. The grace of the pages in their coloured livery, silk stockings and elegant hats contrasts with the roughness of the shepherds and the rags of the blind man's guide. Alongside them we also see supernatural beings such as the angels in their richly patterned and gilded tunics who add delicacy to the overall composition.

The scene as a whole includes a wide range of figure types, poses and notably realistic portraits despite the small size of these figures, some of whom represent trades and activities, such as the groups of butchers, musicians and hunters. Alongside them we also see a remarkable variety of animals, including the migrating birds that nested in the region of Murcia called the Mar Menor and different types of bulls, goats and sheep.

Salzillo's Nativity Scene thus combines the inspiration of the Gospel texts with a wide range of figure types, clothes, trades and activities of the day, all taken directly from life. The narration, with its colourful incidental details, the setting and the figures together create an intimate, domestic atmosphere that is notably different to the more worldly one of the Neapolitan presepe, the other preeminent type of Nativity scene at this date. While the latter are characterised by an urban context inspired by the Commedia dell'Arte, Salzillo makes use of Spanish rural life and its traditions to transmit a devotional mood of a more intimate, accessible nature. 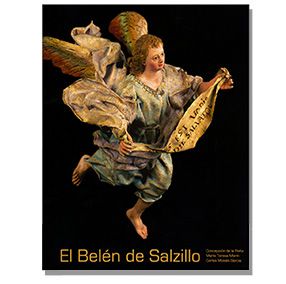