Girl at a Window

The first edition of The Guest Work for 2018, a programme sponsored by Fundación Banco Santander, focuses on one of the most popular paintings in the collection of the Dulwich Picture Gallery in London, the oldest public art gallery in the United Kingdom. As revealed by the date and signature, "Rembrandt /ft. 1645", this work was executed by the great Dutch master Rembrandt Harmensz. van Rijn (Leiden, 1606 – Amsterdam, 1669) in 1645.

The work from Dulwich masterfully combines two of the genres which brought most renown to the Dutch artistic tradition of the 17th century and in particular to the oeuvre of Rembrandt, namely genre scenes and portraiture. In addition, it represents a type of painting that became popular in the 16th and 17th centuries in which the model seems to enter into the viewer's space through the use of various compositional devices, such as presenting the figure leaning out of a window or lowering the frame of the image. The optical illusions provoked by such devices resulted in the viewer questioning the reality of what is seen.

From the early 1640s and until the middle of the following decade Rembrandt and his pupils in his studio experimented with the possibility offered by this device – known as trompe l'oeil – in numerous compositions. Girl at a Window is one of the finest examples of depictions of this type within the artist's oeuvre. The play between perception and reality is brilliantly achieved here, with the result that the model introduces the viewer into the undefined space in which she is located. The perspectival effect is heightened by the diagonal position of the girl's body. Strongly lit and looking directly at the viewer, she introduces us into her shadowy space and perhaps into her world.

Painted in 1645 when Rembrandt was 39, this painting falls somewhere between genre and portraiture. The girl's identity remains uncertain; in the past she has been described as a courtesan, a Jewish bride or an historical or Biblical figure. It is more widely accepted that she is a servant girl; her rosy, tanned complexion along with her brown arms implies she worked outdoors. Leaning on a ledge, she stares directly out of the painting while fiddling with her necklace, either a gold chain or a cord, like that seen around the cuffs and along the seams of her loose chemise. She also wears a small headdress, possibly a type worn in North Holland, and her hair is tied back with red string.

A frequently quoted account by the French art theorist and early owner of the work, Roger de Piles (1635-1709), claimed that Rembrandt put this painting in his window and passers-by mistook it for a real girl. While this story was not strictly true, it served as a general comment on Rembrandt's ability to create realistic portraits that could seduce his viewers. Such trompe l'oeil paintings, where the subject seemed to protrude out of the picture frame, became popular in the 17th century and Rembrandt continued to use and adapt this pose throughout his career.

The confident brushstrokes and impasto paint is typical of Rembrandt's style of the 1640s. During the recent conservation of this painting, the discoloured varnish was carefully removed, revealing a bold mixture of colours in the model's face. Rembrandt often applied his paint with palette knifes as well as his fingers. 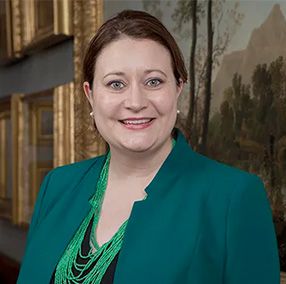 LectureGiven by Jennifer Scott, director of the Dulwich Picture Gallery