In recent years, the Museum has staged a number of medium-sized exhibitions with catalogues designed to examine and promote the works of Basque artists who first made a name for themselves back in the 1970s. Last autumn, for instance, an exhibition was staged of works by sculptor José Ramón Anda (Bakaiku, Navarra, 1949) which followed a showing of a selection of recent paintings by Daniel Tamayo (Bilbao, 1951).

The latest exhibition in this ongoing series, sponsored by BBK Fundazioa, presents 78 artworks by painter Ramón Zuriarrain (San Sebastián, 1948), mostly created in the last decade, although a few are from an earlier period. Also included are some very recent paintings on show to the public for the first time. Altogether, the exhibition involves 44 oil paintings, a dozen of which are large-scale works, 33 watercolours and a mixed media sculpture.

Zuriarrain is a member of a generation that appeared on the Basque art scene in the seventies. With an eye firmly fixed on developments in international art, and the changes wrought by Surrealism, lyric abstraction, Pop Art and the new figuration, this generation had little in common with earlier, post-war Basque art groups more influenced by geometric and informel-style abstraction.

In his early period, Zuriarrain was fond of including Surrealist references in his paintings, of the kind also to be found in works by other contemporary artists, not least in the production of his friend Vicente Ameztoy (San Sebastián, 1946-2001). Later, in a long career, Zuriarrain moved towards a kind of gestural abstraction of intense colour contrasts often in large-scale paintings. His favourite themes tend to be landscapes, whether real or subjective, and the portrait.

With studied rendering and an instinctive feel for painting, Zuriarrain employs gesture, movement and colour to organize enigmatic scenarios shot through with a high-powered imaginative energy. On occasions, he introduces figurative, sometimes autobiographical features that add narrative character and vivacity to the scene. But the ebb and flow of figuration and abstraction in his work never quenches Zuriarrain's taste for painting or the creative vigour with which he renders his world.

Ramón Zuriarrain Cortázar was born in San Sebastián in 1948. He began in the art world in the mid-sixties by attending the Fine Arts Circle in Madrid while still an architectural student. In 1968, his interest in painting led him to the Paris School of Fine Arts, where he familiarized himself with the essentials of art and started to put them into practice. On jis return to San Sebastián, he became friends with fellow painter Vicente Ameztoy, who acted as his guide on the contemporary Basque art scene and in his painting. Alongside Ameztoy, Carlos Sanz and Marta Cárdenas, Zuriarrain exhibited at San Sebastián's San Telmo Museum in 1970. Unlike the previous generation of artists, most associated with the Gaur group, this younger set were drawn more towards figurative painting, in line with the spirit of social commitment prevalent in the Basque Country at the time. In Zuriarrain's case, figuration blended with echoes of Surrealism of the kind readily appreciable in Transformation, now in the Bilbao Fine Arts Museum collection.

In 1971 he took part in the Contemporary Spanish Art exhibition held in Paris, and in 1973 he organized his first one-man showing at the Galería El Pez in San Sebastián. In the same year, he was awarded the Grand Prize for Basque Painting.

During the 1980s, Zuriarrain's painting began to change, approaching Informel-style abstraction, particularly in his landscapes. Here the painter identifies with nature, one of his most frequent themesbut by no means the only one. Although his highly sensorial landscapes have an abstract look about them, they are taken from the life. They emerge from what might at first appear to be random splashes of greens, blues, ochres, siennas and reds that generate quite unexpected forms. Colour organizes the space in and of the painting and takes centre stage, whatever the objects portrayed or the actual theme of the work.

Through the good offices of photographer, filmmaker and writer Rax Rinnekangas, Zuriarrain spent three months in Finland in 1987. His time there provoked a new metamorphosis in his painting, which became more reflexive, more essential in form and colour. The artist's creative concerns turned now to the genesis of painting and its expressive potential. At the same time, he began to use watercolour regularly, producing suggestive compositions of brushstrokes distributed delicately over the paper. This Finnish period was accompanied by exhibitions on the international stage.

Alongside his meditative landscapes, and as a sort of counterpoint to them, Zuriarrain produced some interesting portraits, self-portraits and interior scenes with narrative backgrounds. A good example are the drawings and watercolours he made during a period spent in Egypt with his son Martín; they provide a sort of personal chronicle of the country's 2011 revolution. Humour and irony have always had their place in his work, appearing most often in the small drawings and objects made in the heat of the moment, rapid jottings recording his opinions or jokes about reality.

Everything he has done has been dominated by an idea of change, of transformation, of time moving at considerable speed. Opposites (figuration-abstraction, straight line-curved line, water-earth) are continually added to his works, where they tend to fight it out in a process of unfinished appearances. His artistic references include a youthful (and enduring) admiration for Albrecht Dürer, Dutch painting, the Impressionism of Claude Monet and the Expressionism of Georg Baselitz. 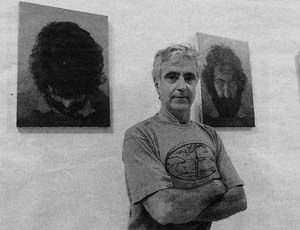 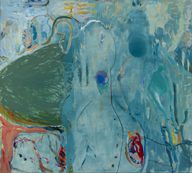 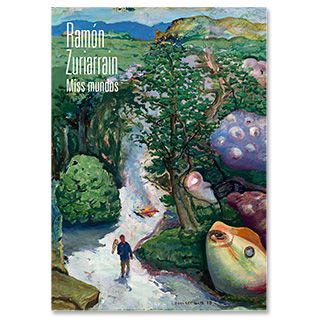