The 51st edition of the Guest Work programme, sponsored by the Banco Santander Foundation, presents a work by Raimundo de Madrazo Leaving the Masked Ball (c. 1885), from the Carmen Thyssen Museum Málaga. The work also helps to contextualize the recent donation by a Bilbao art collector of an oil painting entitled Portrait of the Countess of Bernar (1857) by Federico de Madrazo, featured in a small exhibition that includes other works from the Museum collection by this family clan of painters: José de Madrazo (Santander, 1781-Madrid, 1859), father of Federico de Madrazo (Rome, 1815-Madrid, 1894), who in turn was father to Raimundo de Madrazo (Rome, 1841-Versailles, France, 1920) and Ricardo (Madrid, 1852-1917).

At the door of the Valentín salle des fêtes, located next to Hôtel du Nord in Paris, several fancy-dress revellers leave at the end of a masked ball. In the solitude of the street at night, and by the light of the gas lanterns decorating the entrance, a gentleman invites a young lady in a mask into one of the horse-drawn carriages waiting kerb-side outside the hotel, while soldiers leaning against the doorframe chat absent-mindedly by the doorman of the ballroom. Meanwhile, other masked characters move off along the pavement.

This magnificent snapshot of night-time Paris from the last quarter of the 19th century is a particularly significant example of the remarkable number of genre scenes Raimundo de Madrazo painted for the international market. Here Madrazo takes up the motif of the masked ball, which he returned to on a number of occasions; the theme held a special attraction for artists all over Europe working in the tableautin or panel format much in fashion at the time. Indeed, among other works, the artist presented a spectacular painting entitled Sortie du bal masqué in the non-competition category of the 1878 Paris Universal Exhibition. Highly acclaimed in its day, the painting is an extraordinary display of technical virtuosity  and decorative richness furnished in a seductively frivolous package.

However, in this case, rather than insist on the more anecdotal or decorative aspects the theme seems to call for, the artist limits himself to a subtly ironic nod to frivolousness in the gentleman's invitation to his young companion, whom the artist, by clearly profiling their silhouettes against the ballroom door, makes the painting's central figures, to the detriment of almost any other interest. Curiously the man's face bears a close resemblance to Raimundo de Madrazo's own features, which were familiar at the time from the splendid portrait painted by his father, Federico de Madrazo, in 1875, a painting now in the Prado. Even so, the sequence's narrative interest is to a certain extent subsumed in the artist's interpretation of the atmosphere of the street at night, bathed in the artificial light that picks out the signs of the nearby establishments and magnificently suggests the interiors of the ballroom, the wine bar and the hotel, reflecting Madrazo's fascination (shared by so many artists of the time) with la nuit by gaslight of the Cité lumière.

Painted with an unusually restrained palette for Madrazo, this is a fine example of his exceptional talent as a worthy heir to his brother-in-law Mariano Fortuny's highly wrought virtuosity, and of his razor-sharp observation, appreciable in the scene's every detail, right down to the apparently least important, like the puddle in the foreground, the reflections on the spokes of the wheels, the lettering of the signs and the numbering on the carriage lamps. 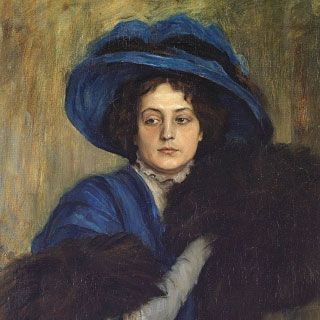 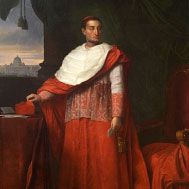 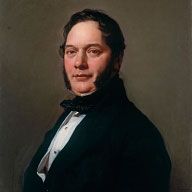 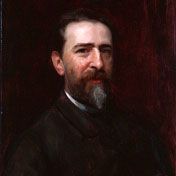