Elizabeth of Valois (1546-1568), daughter of Henri II of France and Catherine de’ Medici, married Philip II by proxy in Paris on 27 June 1559. The marriage was subsequently confirmed in Guadalajara on 31 January 1560. Anthonis Mor’s portrait should be dated to the early months of 1560, as the painter (known in Spain as Antonio Moro) was back in the Low Countries later that same year. Although the rich robes Elizabeth is wearing might seem to suggest that this is what she wore at her betrothal, contemporary sources state that the Queen dressed in the French mode. For the occasion, however, she did wear the jewelled crucifix portrayed here. In any case, the dress was certainly one of the most magnificent items in the Queen’s wardrobe, and could well be the “rich and tawny dress of crimson velvet, and embroidery and flaps for the cut part, with high bodice and tabbed sleeve, lined with reddish yellow taffeta; and the sleeves and hem in scraped white satin, and the trimming done with cut-velvet flaps” which, in the inventory of Elizabeth’s possessions made after her death, was valued at the princely sum of 50,000 maravedis.

The Elizabeth of Valois in the Várez Fisa Collection is a highly representative example of Anthonis Mor’s work as a portrait artist. Mor subjected his forms to a complex process of abstraction before introducing them into a geometric schema, which explains the pronounced rigidity of the poses his subjects took in comparison with those of artists like Titian, with whom he is often contrasted. As is usual in Mor, the subject appears in three-quarter length with the eye closest to the spectator halfway across the panel’s width, which centres the composition and heightens the sensation of proximity. The Queen’s face is lit from the left and slightly from above, clearly outlining the nose and adding some thin, sharp shade to give the subject an aristocratic, distant air. Indeed, the hieratic attitude and seriousness the portrait conveys are quite at odds with what we know of the Queen’s character and are imperceptible in other portraits of her.

Finally, the meticulous rendering of the most insignificant details of her dress suggest that, for this particular occasion, the artist followed a work procedure he had used in 1549, when he had to make a portrait of Philip II. This involved the sitter lending his jewels and robes to facilitate the artist’s work.

Text: Miguel Falomir Head of the Department of Italian and French Painting at the Prado Museum, Madrid 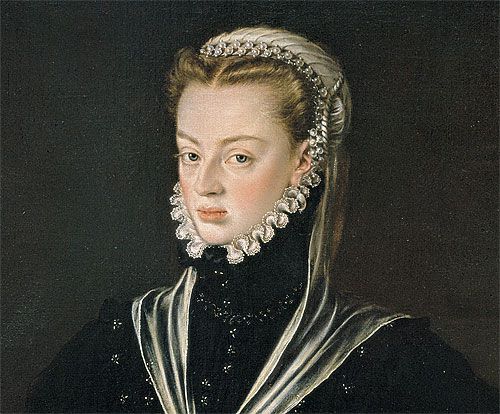 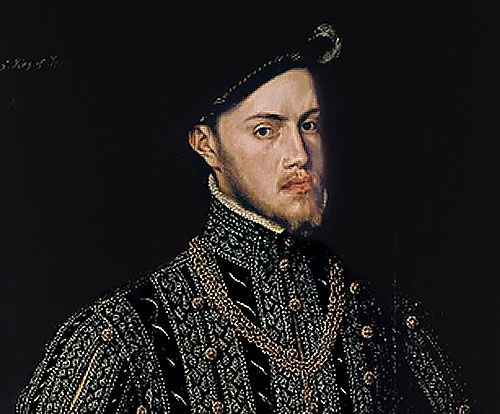 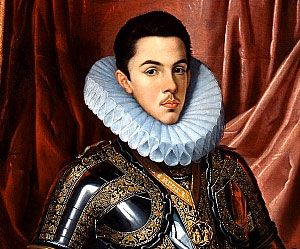