Because of their size and dating (both are from the same year, 1835, according to José Luis Díez 2005) these two pictures, painted by the finest exponent of Spanish Romantic art, are considered a pair. Villaamil gives his idiosyncratic vision of the exterior and interior of Seville Cathedral, one of Christianity’s most emblematic Gothic temples. Also appreciable here is the influence of Scottish landscape artist David Roberts (1796-1864), who Villaamil met in Seville in 1833 and who whetted Villaamil’s appetite for a new style of painting linked to British Romanticism.

The Cathedral of Seville from the Altar Step Side shows the western façade of the building, with the Baptismal Gate, also known as the Baptistery, in the foreground. Built in 1449, it was decorated with Lorenzo Mercadante’s splendid terracotta sculptures between 1464 and 1467. Behind this can be seen part of the neo-Gothic doorway of the Assumption. Enlivening the composition are a number of picturesque popular characters who talk or walk down the street, making the imposing architecture, depicted by Villaamil with his usual detail-perfect topographic accuracy, seem less cold. The effects of the light are particularly interesting, as they contrast the clarity of the Baptismal Gate, bathed in sunlight, with the darker, more sombre side opposite. An over-enthusiastic cleaning process has taken off some of the sepia glazes characteristic of the painter’s technique, although fortunately this has not affected the quality of the actual painting.

The Corpus Procession inside Seville Cathedral shows Villaamil’s exceptional skill in portraying interiors of churches, which he manages to imbue with vaporous, mysterious  atmospherics, which is very much the case here. The scene takes place during Corpus Christi, one of the most colourful and deep-rooted holy day feasts held in the city. In the centre, intensely lit by the light from the transept’s stained glass windows and adjoined to the retrochoir, is the no-expenses-spared monument installed to house the Holy Sacrament. To the left is Juan de Arfe (1535-1603)’s silver monstrance, made between 1580 and 1587, the scale of which is in fact greater here than it really is. Before it are the oddly dressed seises, who add a further note of colour by dancing during the ceremony. In the shade on either side, people set in two compact groups stand around the church columns. On the floor of the nave an inscription reads “AQUÍ YACE CRISTOBAL COLON” (Here lies Christopher Columbus). To produce this composition, Villaamil sought inspiration from a very similar painting by his maestro David Roberts. Years later, in 1838, he would again paint the interior of the Cathedral from the same point. The later painting is now in the National Museum of Romanticism in Madrid. 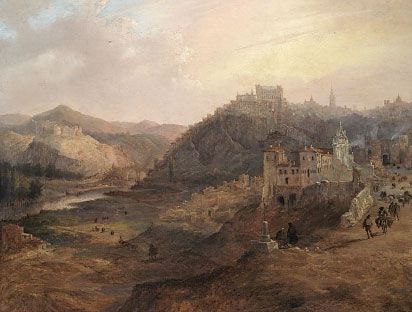