Curated by Peio Aguirre, the exhibition has been designed as the most exhaustive retrospective to date of the works of Néstor Basterretxea (Bermeo, Bizkaia, 1924), an ambition also evident in the catalogue published for the occasion. In 2008, Basterretxea donated to the Museum all 18 sculptures from one of his essential works, the Basque Cosmogony Series, also one of the best-known groups of Basque sculpture from the second half of the 20th century.

Form and Universe provides a 60-year overview of an intensely creative career, during which Basterretxea has experimented with a wide range of techniques and forms of artistic expression. Featuring his evolution from the early paintings to his subsequent dedication to sculpture, the exhibition also takes a look at his incursions in film, industrial, graphic and furniture design and his architectural and urban development projects (which have remained on the drawing-board), photography, posters and writing. The idea is, therefore, to reconstruct what art critic Juan Daniel Fullaondo has called the “Basterretxea kaleidoscope”, as an expression of the artist’s ability to embrace opposing aesthetics, currents, styles and trends within his formal artistic idiom.

Although considered a leading renovator of Basque sculpture in the second half of the 20th century, Basterretxea actually began his creative activity as an advertising draftsman, before turning to painting as a self-taught artist. In the late 1950s he took to sculpture under the aegis of Jorge Oteiza. A founder member of Equipo 57, he also worked with the members of the Barcelona-based Equipo Forma. In 1961 Basterretxea was the only sculptor chosen to represent Spain at the 6th Sao Paulo Biennial in Brazil.

In 1966, along with several other artists, Basterretxea founded the avant-garde Basque art group Gaur. At that time he also began to make films, including short films like Pelotari (1964) and Alquézar (1966), and in 1968 a full-length feature film called Ama Lur, all of them with Fernando Larruquert. In the 1980s, he devoted himself to site-specific public sculptures, and examples of his work can now be seen all over the Basque region and in a number of Spanish, American, Argentine and Chilean cities.

Featuring nearly 200 works, the exhibition is a contemporary and, at the same time, historic review of Basterretxea’s output and of his personal interpretation of tradition, couched in the artistic idioms of the avant-garde.

Basterretxea began his career in painting in the early 1950s. Mid-way through the decade he manifested an early interest in architecture and urban design that is reflected in abstract, geometrical paintings in which he often paid tribute to artists such as Le Corbusier or Ben Nicholson. With the aim of distancing himself from earlier conventions he painted on wood or fibre board and investigated innovative materials such as sackcloth and iron. This is the period of Vertical Interactivity, which reflects the ideas of Equipo 57 with which Basterretxea was briefly associated.

In 1967 Basterretxea embarked on an intensely creative period of contemporary public sculpture, which was almost non-existent in the Basque Country at this date. His homages to Iztueta (1967) and Pío Baroja (1971), both in San Sebastian, and to fishermen and sailors lost at sea (1972), in Pasai San Pedro (Gipuzkoa), are particularly important. These were followed by commissions of a symbolic type such as The Dove of Peace (1988) in San Sebastian and Monument to the Basque Shepherd (1989) in Reno (USA). Worthy of special mention is Urbidea (Water Path) (1993) for the reservoir at Arriarán in Beasain (Gipuzkoa). This section also includes work for the Romanesque church at Lasarte (Álava) and Izaro for the Basque Parliament (1983). Notable among the artist's mural paintings is the crypt in the basilica at Arantzazu (1982-1984).


3. The founding exhibition of the Gaur group at Galería Bariandiarán (1966)

In the mid-1960s and although still actively engaged with sculpture, Basterretxea created an important body of work as a painter and draughtsman. He participated in the founding of the Gaur group of the Basque School, showing four small-format paintings at its first exhibition in 1966 that indicate a move away from the analytical rigour of the previous decade. Conceived almost as "interior landscapes" that convey sensations and a particular relationship with nature, these abstract works with undefined limits involve continuous references to sculptural forms.

Around 1960 Basterretxea experimented with the third dimension through reliefs and low-reliefs in marble and slate which he scratched and incised. These works brought him critical acclaim at the joint exhibition he held with Jorge Oteiza at the Sala Neblí in Madrid. Many of these works find their equivalents in the collages, drawings and prints that the artist has produced throughout his career.

Disk-like forms are one of Basterretxea's favourite typologies, which he has used for logotypes, architectural projects and graphic work, as well as in sculptures. One of the most refined examples is the series Meridians.

Basterretxea was a pioneer of Basque industrial design in the late 1950s when he designed the logotype and furniture for the Madrid company H Muebles as well as other interior design projects. This facet of his output is reflected in his first film, the experimental Operación H (1963), which he made for the industrialist and art patron Juan Huarte. In Irun in the following decade Basterretxea was a joint founder of the company Biok, which focused on modern furniture and for which he produced a large number of prototypes that were not always produced. Celebrated examples are the Curpilla series (1966), the chess set (1967) and the Sua candelabra set (1968).


6. Sketches for the basilica at Arantzazu

In 1962 Basterretxea was commissioned to decorate the new crypt in the basilica at Arantazau (Gipuzkoa), a project in which other avant-garde artists such as Jorge Oteiza, Eduardo Chillida and Lucio Muñoz would also be involved some years later. Basterretxea had barely started work, using an expressionist style influenced by Mexican mural painting, when his drawings on the themes of sin, expiation, pardon and glory were mysteriously erased. This section of the exhibition includes some of the artist's rare surviving sketches for this project, accompanied by the sculptural group that he proposed in 1967 for the crossing of the crypt, as well as four collages in which he investigates the relationship between the viewer and these sculptures, conceived on a monumental scale.

In the 1960s Basterretxea produced his first free-standing sculptures, including Bull (1961) and Sign (1962). Although made in iron they give an appearance of lightness which often suggests the gesture of the artist's hand as it draws on the paper. Bizkaia and Araba (both 1962), of which the originals in stone and wood are displayed here, would ultimately take the form of large metal sculptures installed in public spaces in Galdakao (Bizkaia) and San Sebastian.

Between 1972 and 1975 Basterretxea produced the Basque Cosmogony Series comprising 18 wood sculptures based on mythological figures, forces of nature and traditional objects from Basque culture. During this period he also produced the series in wood entitled Eguzki lore while other works investigate the sculptural qualities of alabaster. Frieze of Basque craft utensils (1980) was ultimately devised to be made in stone on a monumental scale and installed in the airport at Foronda (Vitoria).

Through the use of photomontages Basterretxea locates his sculptures in imaginary contexts different to those in which they were made. Using the technique of collage he "installs" these pieces in landscape with a potent literary charge (Romantic ruins, a Baroque garden or the Amazon jungle) in order to establish a particular relationship, albeit of an imaginary type, between his own and others' cultural contexts.

Poster and graphic design have been among Basterretxea's preferred forms of expression, and since the mid-1960s he has collaborated with a large number of cultural, social and political causes. The combination of collage with photography and typography characteristic of poster design has allowed him to reuse much of his formal vocabulary, experiment with images from sculptures, logotypes and other graphic elements and given them a function within the field of graphic design.

These polychrome sculptures are the result of several years of research into pre-Columbian cultures which Basterretxea also portrayed in his series of television documentaries Arte y culturas en la América prehispánica (Art and Cultures in pre-Hispanic America) (1988-1992). Of medium size and with a marked frontality, these works recreate names of gods, animal figures, rituals and cities in a desire to understand the origins and traditions of other peoples, as is also the aim of the sculptures in the Basque Cosmogony Series with regard to the pre-Christian Basque world.

Volumetry is the term that Basterretxea uses to refer to architectural projects of a utopian nature that are only executed on paper, of which a selection is presented here. Shown alongside them are other examples of the artist's links with architecture, including the house-studio that he shared with Oteiza in Irun (1955-1957) and a number of unrealised projects that he co-created with Oteiza for the Fundación Sabino Arana in Bilbao (1979), the library of the University of Deusto (1985), and Atlantis (2001-2002), which transformed the nuclear power plant of Lemoiz into a science park. One example of the architectural nature of his sculpture is Argizaiola, which the artist transforms into a building in drawings and photographs. 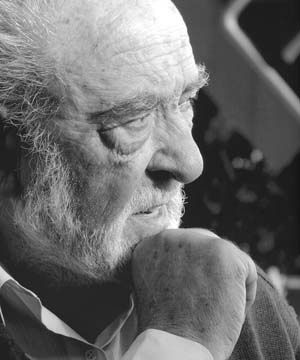 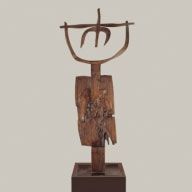 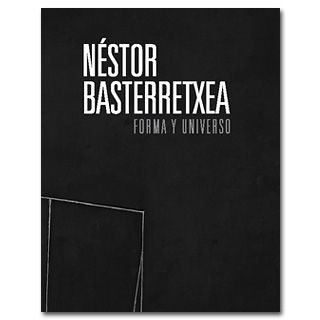 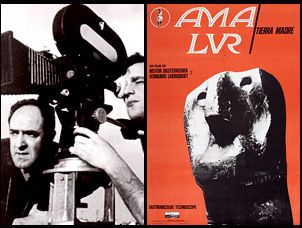 Txalaparta concertAuditorium of the museum 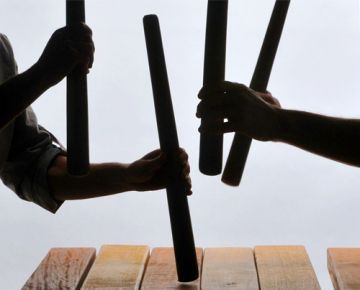 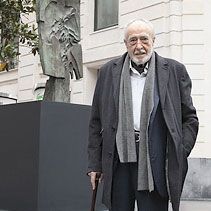 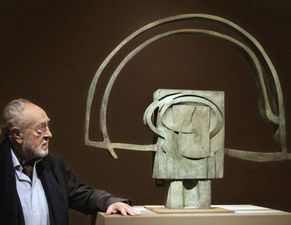 Reference material for the exhibition