The museum will be joining the 3rd International Print Festival (FIG), to be held in Bilbao on 20-23 November, with a major exhibition devoted to the graphic work of Italian artist Mimmo Paladino.

The show includes 194 prints, 2 of them printed especially for the exhibition, and artist's books produced over the last 20 years, as well as several original printmaking plates, the first ever screening in Spain of the feature film Quijote and a variety of documentary material.

For the third year running, the museum will participate in Bilbao's International Print Festival by hosting an important showcase of graphic work, an artistic medium regularly featured in its exhibition programmes. For the previous two festivals, the museum organised Giovanni Battista Piranesi: The Visionary Memory (2012), which explored the artistic personality of one of the greatest masters in the history of printmaking, and Uncharted Sardinia: The Engraved Sign (2013), a large selection of graphic works by ten historical and contemporary engravers from the Italian island of Sardinia.

On this occasion we will offer an extensive survey of the graphic work of one of the most relevant artists working in the international contemporary arena today. This body of work has been forged over the last 20 years alongside his output as a painter and sculptor and in close collaboration with the Laboratorio d'Arte Grafica di Modena, one of Italy's most prestigious graphic arts workshops, which celebrated its 35th anniversary in 2014.

Mimmo Paladino (Paduli, Benevento, Campania region, Italy, 1948) is one of the leading exponents of Italian contemporary art and is also widely renowned in international art circles. He started out as an engraver in the late 1970s, and since then he has used a wide variety of techniques and procedures to express a highly personal iconographic universe that drinks deeply of the history of art and culture. Like other contemporary artists, Paladino has found printmaking to be an intimate, personal medium of expression that allows him to combine a wealth of cultural knowledge with his own world of memories and experiences.

The ample selection of works now displayed at the museum is a fundamental part of the author’s artistic output, which over the years have grown into a vast creative corpus comprising more than 800 graphic images. This makes the show an exceptional opportunity to discover many of the constants in this artist's career and trace his evolution on a journey through this broad selection featuring nearly 200 works of art.

Some of the highlights are the monumental Quattordici stazioni per Napoli (Fourteen Stations for Naples), the artist's book Ombre (Shadows, 2008), the illustrations for the book Don Chisciotte (Don Quixote, 2005) and the series Ulysses (1994) and Cruces (Crosses, 2008).

The exhibition is fleshed out with audiovisual and documentary material on Paladino and his work and a screening of the feature-length film Quijote with the premiere in Spain, directed by the artist in 2006 and presented that same year at the Venice Film Festival.

Mimmo Paladino is one of the creators responsible for the renewal of international art in the final quarter of the 20th century as a member of the Transavantgarde movement. In 1980 the critic Achille Bonito Oliva invited him to participate in a group show at the Venice Biennale entitled Apreto 80 with Sandro Chia, Francesco Clemente, Enzo Cucchi and Nicola De María, who formed the initial core of that art movement. Working out of Italy, after several years in which conceptual art had been the dominant style, the Transavantgarde group triggered a revival of minimal art, installation art and Arte Povera, the craft of figurative painting and the updated reinterpretation of numerous elements of past culture and art history.

A painter and sculptor, Paladino had also developed an ample body work using the most varied artistic languages: prints, terracotta and pottery pieces, set designs for the opera and theatre, film, installations, interventions in urban spaces and collaborative projects with architects. This willingness to experiment with diverse techniques and materials is one of the defining traits of his graphic oeuvre, which he began producing in the late 1970s. Woodcut, silkscreen, etching, lithograph, drypoint, aquatint, manual manipulations or collage using fragments of his own or popular images, photographs or accounting worksheets—these are just some of the printmaking processes he has experimented with, sometimes separately and at other times combining different techniques in a single print.

These multiple media, used individually or collectively, allow Paladino to make the most of the expressive qualities of each. This eclecticism is also reflected in the formal references of his works, ranging from ancient art to the discoveries of the avant-garde movements, which Paladino blends indiscriminately—without prejudice or hierarchical bias—in a unique language brimming with personality.

His restless creative mind draws on a vast iconographic repertoire that includes the myths and fables of Antiquity, folk tales and legends, historical and literary references, and even autobiographical images, from his own memories and dreams to the southern land of his birth. In this respect, he has been described as an artist with ties to both the Byzantine hieratic style and Gothic tradition, and Paladino himself admits to being "an artist of the south, but of the darkest, most mysterious south, and this is why I find poetic sensations that belong to me in certain aspects of Nordic culture, why I can make a totally black painting, just as I can do a totally solar one".

In this way, he culls formal resources and images from the most diverse cultural traditions, from different eras and places. His prints contain references to iconic elements of classical culture like the mask, which in Paladino's work can perhaps be interpreted as a reflection of the artist himself. We also find animal figures such as the bucranium, a symbol of meditation, or the dog which, divested of its symbolic guardian status, becomes an unsettling presence.

From religious iconography (Judaeo-Christian and other traditions) he borrows signs, like the crosses, and techniques like the application of gold leaf, a symbol of eternity, as well as the hieratic pose of Byzantine figures and the gestural quality of that culture's rites. In the exhibition catalogue, art critic Sandro Parmiggiani describes Paladino's imagery in the following terms: "[...] the crucible in which he mingles ancient motifs and traces of constantly self-renewing myths, fables and tales that are lost in the mists of time and fragments of the modern world, with vestiges of so many cultures and points of view [...]".

His swift, sure hand and predilection for form and a wide variety of signs have led him to use motifs borrowed from geometric abstraction as well as numbers and letters of the alphabet as purely pictorial elements. The linocut series Voyelles (Vowels) from 2005, inspired by Rimbaud, and the folder of tinted etchings Il racconto dei numeri (Number Count) from the same year testify to Paladino's constant investigations into the graphic value he ascribes to letters and numbers.

The relationship between the visual image and the written word is another of the artist's principal lines of work. Poetry and literature are a constant source of inspiration for Paladino, who has illustrated a variety of works, from Italian editions of Carlo Collodi's Pinocchio and Cesare Pavese's La Luna e i Falò (The Moon and the Bonfires) to Cafavy's poetry and Aesop's Fables. Of particular note are the set of 18 etchings with a gold-leaf background he created in 1994 for a special edition of Joyce's Ulysses and, above all, an edition of Cervantes's masterpiece Don Quixote, released in 2005, with 40 prints by Paladino and 14 poems by Giuseppe Conte.

All of these elements come together to form the mysterious, ambiguous oeuvre of Mimmo Paladino which, in the words of Enzo di Martino, author of the first catalogue raisonné of the artist's graphic work, "tends to pose questions that have no answers but, on the other hand, forces one to listen to it long and patiently, to look at it slowly, intensely and thoughtfully." His work brings spectators face-to-face with forms and signs that come from an ambiguous time, and yet the impossibility of solving the enigma is precisely what audiences find so fascinating, situating Paladino's oeuvre in a dimension of poetic contemporaneity. 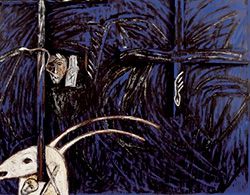 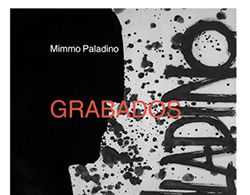 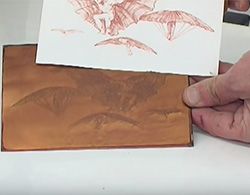 Graphic techniques of the 19th century