Room 33, the Arriaga gallery and outdoors

For some years now, the Museum has made a point of showcasing the work of Basque artists born in the 1940s and who made a name for themselves in the seventies. In the last few years, the recent work of artists like sculptor José Ramón Anda (Bakaiku, Navarra, 1949) and painters Daniel Tamayo (Bilbao, 1951) and Ramón Zuriarrain (San Sebastián, 1948) have featured in attractively packaged exhibitions complete with catalogues.

The forties’ generation of artists proved essential to contemporary Basque art, dominated, until their arrival, by geometric or Informel-style abstraction. The newcomers introduced a figurative art largely based on the images and ploys of Pop Art, even if much of what they did was still anchored in the work of the previous generation. The originality and sheer technical quality of his painting made Mikel Díez Alaba (Bilbao, 1947) a central figure in this shift.

Mikel Díez Alaba: After An Age, sponsored by BBK Fundazioa, features 33 works, most done in acrylic on canvas or paper over the last three years. The core of the exhibition is to  be found in the Museum’s Gallery 33, including a mural work comprising 144 small paintings, which Díez Alaba calls “minimals”. A number of works, mostly re-sized prints of originals (some on show in the Gallery), are hung in the Arriaga gallery. One work is on show outside the Museum. Finally, another painting can be seen in the Museum’s contemporary art section, in the company of works by fellow Basque painters Balerdi and Sistiaga. The paintings by these two artists share the same kind of spontaneous abstract-tending technique to be found in Díez Alaba’s work.

Díez Alaba himself chose these mature works (most of them landscapes) for the exhibition. His intention was to use this particular selection to produce a kind of harmony in which the vivid brushstrokes would spark in the spectator a reaction favourable to peaceable meditation on nature.

Mikel Díez Alaba was born in Bilbao in 1947. After introductory studies in his home town, he went on to Valencia and then to Madrid to complete his training at the San Carlos and San Fernando higher schools of Fine Arts respectively. In the early seventies he moved to Paris on a grant from the Juan March Foundation.

At the start of his career, he attracted attention with works of social criticism featuring distorted figures in scenarios of a rough, disturbing austerity. This figurative painting (largely Expressionist in nature, although with some British influences, particularly Bacon, Hockney and Peter Blake) is a sharply ironic critique, tinged with existential angst, of the bourgeoisie, its social context, customs and characters.

However, this particular phase, fuelled by the events of the time, did not last long. From 1974 on, his work began to change. With the human figure banished from his repertoire almost entirely, he evolved towards a kind of expressionist abstraction, full of charged colouring and violent brushstrokes. Geometric structures, on occasion with a vaguely architectural look about them, appear in his paintings, framing black, red, white and yellow lines, set down with the vigorous, irrational gesture of action painting. Around that time Díez Alaba also embarked on the intense round of one-man and group exhibitions that continues to this day.

Another fundamental change in his painting came about in 1976, when he turned away from vague, nocturnal urban images to renew his formal vision by exploring daylight and nature. With gesture ever to the fore, allied to brilliant colouring, he was now increasingly drawn to rendering plant-like abstractions, which soon evolved into broad landscapes. To begin with, the trees and plant motifs, executed with delicate transparency, called to mind the landscape art of the German Romantics. But before long they acquired a more Surrealist look which, on occasions, recalls the expansive use of colour and Surrealist scenarios of paintings by Matta. Around that time, he also discovered the ideas of Jorge Oteiza, which conditioned his conception of artistic experience as a pathway to knowledge, and the vital importance of the slow, painstaking creative process of his works.

But his painting would not change definitively until 1981, when he moved to Minorca and his work became transfused by the Mediterranean light and landscape. From then on, the painter’s new surroundings utterly absorbed his creative interest. Colour becomes lyrical, full and alive, and the gestural flourish is more controlled and abstract, enabling him to capture the nuances of sea and sky in a personal equilibrium, or tension, between abstraction and figuration.

Rendered with an intentionally descriptive technique, full of broad gesture and fluid and, at times, transparent colouring, his atmospheric compositions recall the delicacy of execution and calligraphic touches of the Orientals. Gradually, his forms began to take on greater definition; colouring became greatly enhanced. These works are, then, the expression of the artist’s relationship with the open space of his island home and capture his personal world of abstract landscape and the surreal air that has for so long given his work stability and continuity. 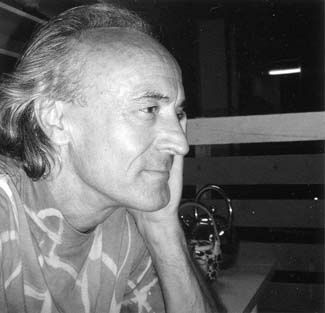 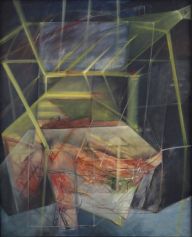