Produced by the Bilbao Fine Arts Museum, Markus Lüpertz. 1963–2013 showcases 91 works by painter and sculptor Markus Lüpertz, produced during a prolific 50-year career. In that time he has established himself as one of the foremost artists of his generation. Dating from the early sixties to the present day, the 60 paintings, 19 sculptures and 12 works on paper include the sculpture Head of a Woman: My Mother’s Head (1987) and the painting The Architect’s Tool (1988), acquired in 2002 and 2009 respectively for the Bilbao Fine Arts Museum contemporary art collection. Located on the Paseo de Abandoibarra walk, Judith (1995) has also been part of the city of Bilbao’s collection of public sculpture since 2000.

This is the first major retrospective of Lüpertz’s work to be held in Spain since the exhibitions at the Queen Sofia Art Centre Museum in Madrid in 1991 and at Valencia’s IVAM modern art institute in 2002. Art historian Kosme de Barañano has selected the works and essays for the catalogue. Barañano organized both the earlier exhibitions and is a leading expert in Lüpertz’s oeuvre.

Markus Lüpertz is part of a generation of German artists that made a name for themselves after World War 2. Amongst his contemporaries are major figures such as Anselm Kiefer, Jörg Immendorff, A. R. Penck and Sigmar Polke. A key member of the group originally known as the Neue Wilden, the New Savages or the new Expressionists, Lüpertz developed a highly personal form of figuration, reflected in his interest in the human body and landscape. He found inspiration in Greek mythology, Old Masters like Poussin and Goya, and some of the great composers of classical music, particularly Wagner and Mozart. Clearly appreciable in much of Lüpertz’s oeuvre, as in the work of other contemporary German artists, is a deep-lying concern with Germany’s dramatic recent history.

After settling in 1948 with his family in what used to be known as West Germany, Lüpertz (Liberec, Bohemia, Czech Republic, 1941) began his career as a painter in the 1960s. From his origins in Abstract Expressionism, he gradually moved towards more figurative works, finding inspiration in many different periods of art history. His output includes re-readings of Mycenaean sculpture and of the works of artists like Poussin, Corot, Courbet, Picasso, Matisse, Ernst and Giacometti.

In 1981 he added sculpture to his body of work, until then confined to painting. In the summer of that year he made a series of sculptures visibly influenced by Picasso. His unflagging interest in classical art led him to produce, between 1980 and 1990, a group of mythological sculptures inspired by Greek statues and Etruscan votive sculpture. Distancing himself from the basic techniques of sculpture, he sought to fashion his own personal idiom from wax and plaster modelling. Later, he took to carving figures and defining the forms he wanted before casting them. The use of both methods is clear in the end result, which combines the precision and accuracy of modelling with the spontaneity of carving. In consequence, his sculptures, often polychromed with an almost Expressionist vigour, convey a strong sense of the corporeal. On occasions, more conservative sectors have failed fully to grasp what Barañano describes as the “disfigured figuration” of Lüpertz’s sculptures, which have sparked no little controversy when installed publicly.

Apart from his career as an artist, Lüpertz has also worked in art teaching world. For more than twenty years, from 1988 to 2009, he was rector at the Dusseldorf Academy of Fine Arts.

Mounted in the Museum’s BBK Gallery, this retrospective is designed to give a profound insight into Lüpertz’s career as a whole. To this end, it is divided into five sections, each section corresponding to a phase in the evolution of his artistic interests. Furthermore, the works have been placed in such a way as to illustrate the formal tenets held by the artist over his fifty-year career. Sometimes works from one particular phase have been placed with others from a different period; this happens, for instance, in the final section, which includes themes and symbols from his earliest output. The idea is to help the spectator to follow the development of the artist’s oeuvre over time, while adding references to other phases to shed light on the features of his style and way of working that have remained constant throughout his career. Painting and sculpture are mixed together in the entire itinerary, occasionally being accompanied by sketches to explain changes in scale and the sense of the monumental nature of the works.

Our itinerary begins with a work from 1963 from the Donald Duck series, an example of Lüpertz’s reaction to Anglo-American Pop Art, in which he critiqued the artists’ appropriation of images originally codified by comics. This is the starting-point for a new vision for painters, one that Lüpertz himself theorized with the publication of his Dithyrambic Manifesto, which emphasized banal objects in large formats, as occurs in 1966’s Soccer Ball.

In the early seventies, he produced one of his most controversial series in the “German motif” paintings, with which he condemned the barbarity of the III Reich and once again critiqued, this time implicitly, the superficial vision of US Pop Art. Lüpertz was greatly attracted by themes bristling with connotations, including soldiers’ helmets, uniforms, swastikas, fuses and so on, rendered on a large scale with a “military” palette in which greens, browns and ochres predominate. At this time, Lüpertz was beginning to make a name for himself, known, and occasionally criticised, for his excessive personality.

1975–1985 The Deconstruction of the Image and Style Painting

In his next period, Lüpertz explored the human figure, in an idiom forged between figuration and abstraction after close study of the work of French sculptor Aristide Maillol (1861–1944).

The two 2-metre-high drawings Markus-Maillol, from 1975-1976, bear witness to Lüpertz’s interest in the human figure at a moment when 20th-century art had all but turned away from it. At around the same time, he began to deconstruct images on black spaces in an experimental style somewhere between figuration and abstraction. From then on, figuration began to lose its narrative interest for Lüpertz, becoming instead a test bench for forms in equilibrium. Motif could now be discarded; form  absorbed his creative interest completely.

1985 and 1993 The Mycenaean Smile and the Classical Tradition

Throughout his career, Lüpertz has retained a particular interest in mythology and the art of Antiquity, the Ancient World. As he put it: “... Antiquity is a world that transcends the individual. A world where everyone worked to a single idea, found just the once”.

In 1985 he executed the huge 4-metre long painting Paintings on the Mycenaean Smile–Summer’s Day, which takes up the conventional view held in art history of the “archaic smile”, a feature of Greek sculpture of the age. A year later, he produced Titan, a painted bronze sculpture. To this period, together with other works in the exhibition, belongs one of his signature series, which he worked on between 1988 and 1990. Based on the figure of French landscape artist Nicolas Poussin (1594–1665), the series mostly features paintings on the grand scale.

From 1997 to 1999 Lüpertz produced new landscapes and vanitas-style still-life paintings with the skull as a recurring motif: “The fight against death is the most important conflict facing the artist ...”, Lüpertz says. The works are constructed through the juxtaposition of parts, a technique that culminated in the spring of 1999 in a series in which Lüpertz portrays the trees opposite his Düsseldorf studio interwoven with abstract fragments.

2003-2013 From Aesthetic Criticism to the Vision of Arcadia

To end, this section features works from the last decade (2003–2013), in which Lüpertz turned back to his own early works. These are nude torsos or male figures featuring  motifs, like the snail, that figured in his early repertoire.

He also painted landscapes from around his Berlin studio, to which he often added male nudes seen from the back and references to classical Greek statuary. These are works that reflect Markus Lüpertz’s primordial interest in creating paintings which, rather than represent the world, prompt us to meditate on it. Paintings and sculptures that generate a new image, capable of recovering the transcendent nature of classical art through a contemporary idiom. 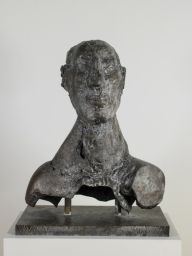 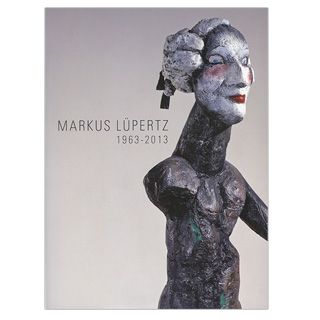 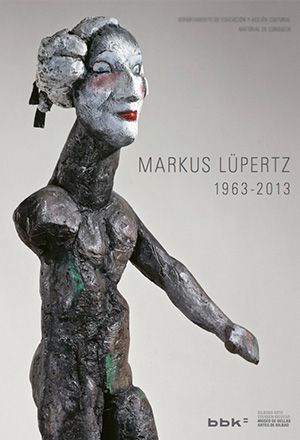 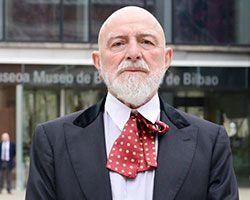 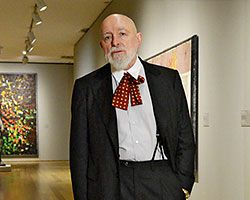 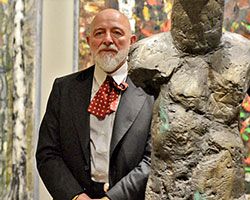 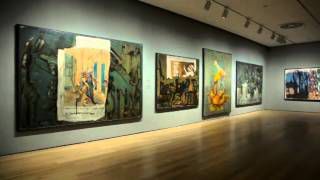 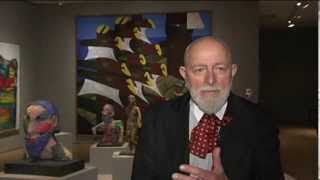 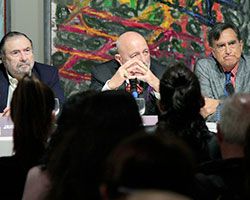 Markus Lüpertzmeets the Friends of the Museum