It is ten years now since the Banco Santander Foundation began to sponsor The Guest Work programme. During that time more than fifty works have been presented in 45 editions, including the present one, which features an emblematic painting by Antoni Tàpies (Barcelona, 1923-2012), currently owned by the University of Navarra Museum.

The work was donated by local art collector María Josefa Huarte to the University of Navarra in 2008 alongside fifty other paintings and sculptures. Besides four other works by Tàpies, the donation included artworks by Pablo Picasso, Jorge Oteiza, Pablo Palazuelo, Eduardo Chillida,  Kandinsky and Mark Rothko.

Over the years, l’ esperit català (The Catalonian Spirit) has been shown at several Tàpies exhibitions. One was at the Spanish Museum of Contemporary Art, MEAC, in Madrid in 1980, another at the Antoni Tàpies Foundation, Barcelona, in 1992. Other venues included the Valencia Institute of Modern Art, IVAM, also in 1992, the Serpentine Gallery, London, in the same year, and the Barcelona Museum of Contemporary Art MACBA in 2004.

From 1954, after an early Surrealist period, Tàpies oeuvre began to show the clear influence of the European art informel movement, and his works were shaped conceptually by existential philosophy and Zen. Inspired by these principles, Tàpies elaborated one of the most complex and creative careers in what might be termed ‘matter’, or ‘material’, painting. The addition of gestural lines and strokes, of different kinds of signs and everyday objects, and the subsequent creation of three-dimensional works greatly enhanced his output, which eventually had much in common with Arte Povera and installation art.

A couple of particularly good examples of his primordial concerns are to be found in paintings in the Museum collection, which now accompany The Catalonian Spirit: Large Oval is from 1955, when Tàpies had just begun to be influenced by informel-style material abstraction. The work’s transcendent formal sobriety marks it out as one of the earliest of Tàpies’s masterpieces. Sign and Material, from 1961, places particular importance on the actual physical support and its material qualities: a board bearing signs, textures and stains, all executed with an extraordinary freedom.

The Catalonian Spirit, which we are now able to present thanks to the generous sponsorship of the Banco Santander Foundation and the temporary loan granted by the University of Navarra Museum, was produced early in the following decade, at a time when Tàpies’s production had become an expression of the power of protest in art. The work is a no-holds-barred manifestation of his political commitment to the Catalonian movement, its struggle for freedom of expression and its opposition to the Franco regime.

His convictions find expression in this large work (200 x 275.3 cm) through the portrayal, as a kind of sign in itself, of the four red stripes of the Catalonian flag, set against a dense yellow background covered in written messages and other graffiti-like marks. Words including the Catalonian terms for freedom, democracy, culture and Viva Catalonia, and signs such as an open eye and an open mouth are distributed across the surface of the painting. Red stains like fingerprints are also there, bearing witness to some large but anonymous group of people. With all its charge of protest and demand, the painting evokes the expressive power of a wall covered in graffiti, the spontaneity of a placard and the urgency of a manifesto.

From the early stages of his career, Antoni Tàpies’s works were associated with “street graffiti and a whole world of repressed, clandestine protest; a world full of life that moved around the walls of my country”, as he himself put it in his Comunicación sobre el muro (Communiqué on the Wall, 1969). Urban walls became places for political and personal messages, similar to the kind of things Brassaï photographed in the 1930s; what the artist does is to transfer such messages directly to the painting. “Every wall of a city that family tradition had made me think of as my own, was a witness to the martyrdoms, to the sheer inhuman backwardness inflicted on our people”.

Tàpies made The Catalonian Spirit in 1971. Essentially, it is a wall reflecting Catalonian life in the last few years of the Franco regime. Marked by the four vertical bars of the Catalonian flag, the painting is full of messages, some large, like “libertat (freedom)”, “Catalunya viu (Catalonia lives)” and “Visca Catalunya (Viva Catalonia)”. In general, the messages are about spiritual and political renewal: dialogue, social equality, democracy, truth and culture. The painting is thus a political and aesthetic manifesto: a “true Guernica for the resistance”, in Josep Melià’s words.

In opposition to those who understand the avant-garde in all its manifestations as an essentially internationalist—and therefore apolitical—movement, Tàpies argued in favour of the artist being firmly rooted in his own land, as he wrote in another article of the time (El arte de vanguardia y el espíritu catalán (Avant-garde art and the Catalonian spirit), 1971): “Patriotic feeling—to be brutally frank—in our country at least and despite what the less patient among us might believe, is also still at bottom a preserve of the progressives”. And this, for Tàpies, is not localism, but rather an attempt to “keep the essential battle alive, be it in love or war, on behalf of humanism, democracy and freedom”.

For Tàpies, the primordial function of the artist is not to talk about himself, but to appear as the “almost anonymous” spokesman for the “collective”. And this is what happens in The Catalonian Spirit, which presents us with an urban wall that provides a space for the anonymous demands of the people.

This work was part of the collection of María Josefa Huarte, who bequeathed it to the University of Navarra in 2008. 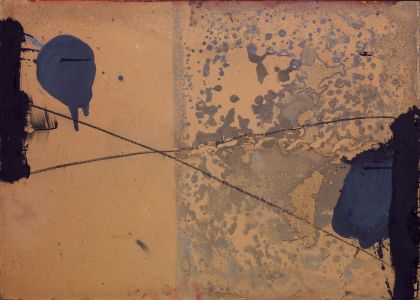 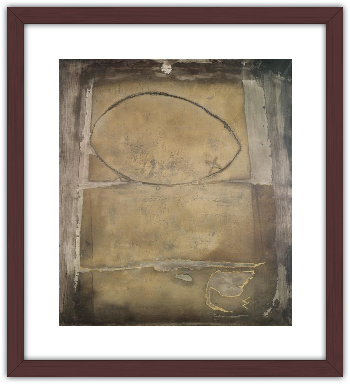 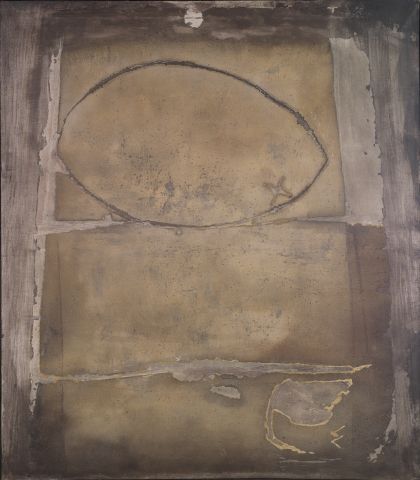 Antoni Tàpies in the museumVirtual visit