Launched in 2001, the Guest Work Programme gives art lovers in Bilbao the chance to see works on short loans from other institutions. But the guests also stand to gain: shown as a one-work exhibition in the context of the host Museum’s own permanent collection, they acquire new meaning. In 2004 Fundación Banco Santander became sponsor of the initiative. Besides making several editions of the programme possible every year, the sponsor also occasionally provides works for the programme from its own collection. Since the first edition in 2001, there have been 41 in all (including this latest one). In that time, 48 works of art have graced this particularly striking setting.

Our present guest is a later work by one of the modern masters of Belgian painting, Paul Delvaux (Antheit, Lieja, Bélgica, 1897–Veurne, Bélgica, 1994). Long associated with Surrealism, Delvaux’s store of images is a highly personal one that juxtaposes features from classical architecture, cityscapes linked to the idea of travel (railway stations figure prominently), hieratic, mostly female figures, dressed or nude, and some rather surprisingly lively skeletons. Together these elements make up a complex visual repertoire to which Delvaux would return throughout his career.

Dating from 1944, the work now on display, L’appel, comes from the Telefónica Foundation Collection, which cooperated with this programme in 2011, when it loaned a fine painting —La Belle Société, 1965-1966— by another great Belgian Surrealist of the 1930s and ‘40s, René Magritte (Lessines, Hainaut, Belgium, 1898–Brussels, 1967). A meeting in 1935 between the two men, born just a year apart, led to a long and rewarding exchange of artistic experiences and ideas. Interestingly, the Museum Collection also has a mature work, Vierge et mondaine, c. 1933, by another Belgian master, James Ensor. Born twenty years before Delvaux and Magritte, Ensor provided a connection with the tradition of Flemish painting in his taste for the grotesque, his painstaking methods as a painter and his preference for a richly coloured palette.

Paul Delvaux (Antheit, Belgium, 1897-Veurne, Belgium, 1994) painted L’appel in 1944, by which time he was a well-established artist. At that stage of his career, he had exhibited his work with other painters of the stature of Magritte, travelled twice to Italy, taken part in the International Exhibition of Surrealism mounted in Paris and Mexico and had held his first retrospective exhibition at the Palais des Beaux-Arts in Brussels. At 47, Delvaux still had another half-century of life and work before him, in which time he would receive all kinds of awards for his achievements as a painter, participate in biennials, hold retrospectives and be honoured with medals and tributes. One of the most famous Belgian artists involved in the Surrealist movement, he was at the same time one of its most personal, indefinable practitioners.

Delvaux’s early works were influenced by French landscape painting, particularly by members of the Barbizon school and Courbet, while also carrying echoes of the Symbolism and Expressionism of Ensor and Permeke. Between 1920 and 1924 he studied architecture and painting at the Académie des Beaux-Arts in Brussels, and it was in the 1930s that his more personal style, rooted in the experiences of childhood and youth, began to develop. Amongst his strongest sources of inspiration were the illustrated works of Jules Verne, Latin and Greek classes at school, which awakened his interest in the classical world, and his visits to the Fair in Brussels, where he was particularly impressed by the medical curiosities at the Spitzner Museum. These were the essential ingredients of the unmistakable world found in his paintings.

Several characteristic motifs of Delvaux’s work are present in L’appel, including a skeleton, women and classical architecture. In the biology lab where he studied as a boy, Delvaux was fascinated by the skeletons hanging on the walls; this fascination would later feed the most sombre strand in his personal iconography. The women, mostly nude Venuses or Eves whose eyes rarely engage with the spectator’s, have an inexpressive, hieratic look about them; these dummy-like figures are a disturbing presence in the stage-architecture scenarios of the artist’s paintings.

To us, such scenes seem to be narrations of some moment out of time: no explanation is given as to what is going on in the painting, at least no easy one. This is where classical inspiration and Surrealism combine to produce structures that owe a great deal, as Delvaux himself was happy to acknowledge, to his encounter with the work of Giorgio de Chirico and his metaphysical landscapes. Delvaux’s compositions feature geometric proportions within a decidedly classical, academic setting, a sort of silent stage-set on which the figures, or actors, strike up some rather disconcerting connections. Indeed, “scenery and extras” provide the symbolic element of his artistic idiom. 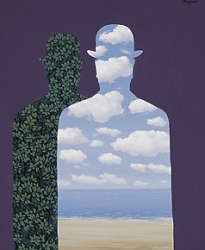 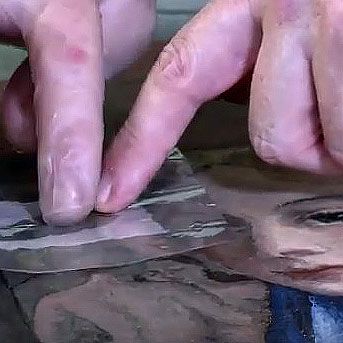 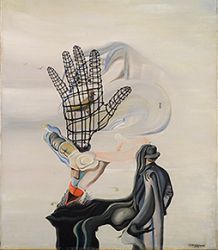 Paris and the SurrealistsPast exhibitions