From 2001, The Guest Work programme has exhibited outstanding works from a number of museums and collections as a way of enriching our vision of artists with works in the permanent Museum collection, or of showing artists not represented there. In 2004 the Fundación Santander became involved with the initiative, sponsoring each new edition, facilitating the organization of several editions a year and, occasionally, even loaning works from its own collection.

In this, the 26th edition, the guest work is a panel by one of the best Spanish painters of the 16th century: Luis de Morales, known as 'el Divino' because of the depth of emotion that, with a meticulous, painstaking technique, he brought to religious iconography. His favourite themes are the Virgin with the Child and the Pietà, and both can be seen now at the Museum thanks to our latest guest work. Moreover, this Virgin with the Child, from the Arango Collection, Madrid, provides the perfect accompaniment for one of the finest works in the Bilbao Fine Arts Museum collection, Pietà, a panel of almost exactly the same dimensions from ca. 1560.

In terms of sheer quality, this is one of the finest of all the works Luis de Morales produced on this theme, or variations of it. He offers here an image in which the Child clings fondly to His mother while she turns her melancholy gaze on Him, half-guessing the sad future that awaits her son.

Angulo describes the Virgin as "radiant and serene as moonlight" when portrayed in this kind of painting by Morales: This poetic description matches the present work perfectly. The figures are indeed shown as if lit by the light of the moon, giving them that slightly waxy look so often seen in Morales' paintings.

A striking feature of this highly colourful painting is the delicacy and attention to detail with which it is painted. The modelling of the figures, enveloped in a soft sfumato, is clearly influenced by Leonardo.

Both are lit by a powerful light pouring in from the left hand side, which highlights flesh brightly against the dark background, a contrivance Morales employed in many of his works. A good example of all this is the Bilbao Pietà, dated from ten years earlier.

The Virgin's unusual headwear, referred to in the title, has a round brim covered with gauze ribbons of subtle transparencies, a model appreciable in other Spanish and Portuguese paintings dating from the late 16th and early 17th centuries. The Virgin's robes have occasionally been associated with gypsy apparel, which explains why the panel is also known as the Gypsy Virgin, although some authors link the hat to the courtly robes of the time.

Luis de Morales worked all his life in Extremadura, Andalusia and Portugal, and developed his attractive, personal style on his own, far from possible influences of the Court and the main artistic centres of the day. His production includes large retables and small prayer paintings imbued with a powerful spirituality, which won him the nickname 'el Divino'. His favourite themes include the Pietà and, as in this work, the Virgin and the Child; in both, Morales' art achieves an exalted religiosity. 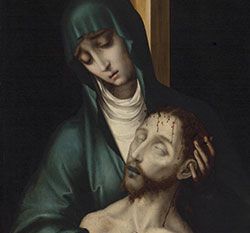 Luis de Morales in the museum