In the second event of this year, the Guest Work Programme, sponsored by the Banco Santander Foundation, is presenting a representative work from the career of Juan Muñoz (Madrid, 1953–Ibiza, 2001), who is regarded as one of the artists who contributed the most to updating international sculpture in the last few decades of the 20th century.

Entitled Hanging Figures and dating from 1997, the work will be displayed to the public in the hall of the museum's old building until the 2nd of June of 2019.

It is comprised of two human figures (160 x 70 x 50 cm each) made of resin, with indistinct features and clothing. They remain locked in an artificial and practically identical posture and are suspended 4.5 metres from the ceiling with nooses that come out of their mouths. Despite their proximity to each other, the absence of communication between them conveys to viewers loneliness and alienation. The monochromatic grey finish accentuates this sense and magnifies the anonymity of the figures.

The piece reflects Juan Muñoz's fundamental interest in representing the human figure in a nonspecific, transcendent way, which in this case materialises in a double figuration whose size—slightly smaller than real-life—contributes to distancing the artistic object from the viewer. Hanging Figures is part of the extensive set of hanging works that the artist began to produce in 1997, the year this sculpture was made. Just like the other pieces in the series, Muñoz totally transforms the usual way sculpture is viewed by radically shifting the viewer's vantage point.

At the same time, he emphasises the three-dimensionality of the work, which interacts intensely with the space in which it is displayed. This concern with the sculpture's relationship with the place where it is displayed is another constant feature of the artist's work. Starting with this idea, the work has been mounted in the recently renovated hall of the museum's old building. The choice of this location is not random: its central location within the building, the uniqueness of the neoclassical repertoire and the natural light that floods this space from both above and the sides create a theatrical atmosphere which sparks a sense of surprise and bewilderment. Hanging Figures emerges upon contact with the viewer.

The position of the figures, suspended from the ceiling, forces viewers to raise their eyes ceilingward, thus incorporating the idea of verticality and creating a dynamic, unusual way of viewing a work of art: raising one's eyes to the work from the hall, gaining multiple perspectives as one follows the rhythm of the staircase from the landing where the window is, and finally shifting the vantage point when viewing from above at the top of the stairs. Furthermore, the piece is equipped with a motor which makes the two inert figures rotate slowly around their own axis, thus contributing to breaking the intrinsic stillness of sculpture and making the views of it not stable.

In short, Hanging Figures is a faithful reflection of the most important concerns and artistic interests of Juan Muñoz. Its installation in the historical space of the museum's old building appeals directly to the viewer while also enhancing its expressive intensity.

The participation of the sculptor Cristina Iglesias (San Sebastián, 1956) in the process of mounting the work, along with her profound understanding of Juan Muñoz's oeuvre, has been essential. 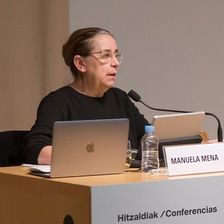