This new edition, number 53 in the Guest Work programme, brings to Room 32 of the museum a work from the collection of the Centro José Guerrero in Granada. Entitled Black Intervals, this large-scale oil on canvas (180 x 278 cm) dates from 1971 and is characteristic of a brief period when Guerrero introduced matches as the principal motif in his compositions.

After his initial studies at the School of Arts and Crafts in his native city, José Guerrero (Granada, 1914-Barcelona, 1991) embarked on a quest for his own artistic identity, pursuing his particular interests within the context of the limited cultural scene in post-war Spain. In 1940 he moved to Madrid to attend the San Fernando Higher School of Fine Arts, where he was a student of the painter Daniel Vázquez Díaz.

In 1945 and after completing his artistic training Guerrero moved to Paris with a study grant from the French government. There he made first-hand acquaintance with the artistic avant-garde and with the work of Pablo Picasso, Joan Miró and Juan Gris. Following this discovery, which had a profound effect on Guerrero's creative practice, he made various trips around Europe before settling permanently in New York in 1950 where he made contact with the American Abstract Expressionist painters and with Action Painting and started to produce his first abstract paintings.

In 1954 the Solomon R. Guggenheim Museum purchased one of Guerrero's paintings and included it in an exhibition on recent acquisitions alongside works by Pollock, De Kooning, Motherwell, Kline and Matta, among others. Guerrero also established contacts with the circle of Spanish exiled intellectuals, including the poet Jorge Guillén and the García Lorca brothers. As a result, and having by now evolved his own language of forms and signs close to gestural art, Guerrero became part of the international art scene.
In the mid-1960s he lived in Spain for three years, where he associated with the Informalist artists of the group linked to the Museo de Arte Abstracto Español in Cuenca, which opened in 1966, the year that the Grupo Gaur of Basque artists was founded. Guerrero's painting of this period is characterised by the juxtaposition of planes of enormous chromatic vigour. On his return to New York in 1968 he produced a series of more synthetic works, followed by a fully mature period defined by forms such as the oval or arch set between planes of colour.

In the early 1980s Guerrero became an influential figure in the art world and he received numerous awards for his career, resulting in renewed artistic energy that led him to produce a body late work which is both solid and luminous.

Following the time he spent in Spain, marked by his association with the new Museo de Arte Abstracto Español in Cuenca, in the late 1960s Guerrero returned to New York and embarked on a period in his work that culminated in 1970 with a series of paintings entitled Phosphorescences. He exhibited them in two galleries in New York and continued the series two years later in the form of a portfolio of silkscreens of the same title, published by the museum in Cuenca.

On numerous occasions the artist himself explained how the series originated from his observations of a book of matches [fósforos in Spanish] joined by a cardboard base, during a transatlantic flight between New York and Stockholm when he also contemplated the reverberation of the blue of the sea, which seems to be depicted in a painting of that same year entitled Blue Intervals.

Guerrero made use of the seemingly inconsequential starting point of the book of matches to produce numerous combinations based on a play of scale, compositional ordering of a vaguely figurative element and the tension established between that element and the background. This is a reduced code which he exploited in a short series but one of particular creative intensity, based on the ordered form of the motif. Guerrero executed versions that range from the luminosity of large areas of colour, learned from Rothko, to the sober chromatic reduction of Black Intervals.

This composition, characterised by a limited and contrasting chromatic range, acquires the appearance of a monumental architectural frieze due to its large size. It is also representative of Guerrero's work in general in its pronounced emphasis on black, a colour that reappears throughout the artist's career from the outset, as evident in the title of an early New York composition of 1958, The Presence of Black.

In 1982 the Bilbao Fine Arts Museum acquired the acrylic on canvas Black Centre (170 x 141 cm) which dates from 1975, four years later than the present Invited Work. In the museum's painting the composition is structured into horizontal planes and bands of colour with an emphatic, vertical black centre that rests on a base of the same colour. Two black lines tighten the composition while a further two white ones and a round element of the same colour balance the entire structure and add the vibrant luminosity of the type of geometrical painting with imprecise outlines characteristic of Guerrero's work as a whole. 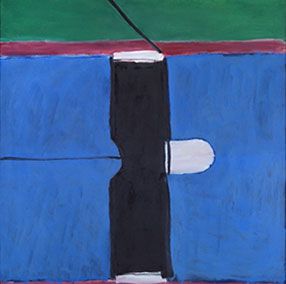 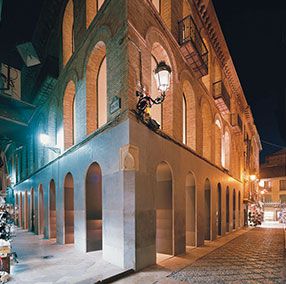