"All I want is for my works to lighten the heart and flood the eyes and the soul with light." That was how Joaquim Mir (Barcelona, 1873—1940), one of the most famous and influential artists in Catalonian art circles in the early 20th century, summed up his private art manifesto in 1928. Colour and light meant everything to Mir, and he used them to build a personal idiom in which he created a surprisingly modern oeuvre, beyond the art movements like Impressionism or Symbolism with which critics have often sought to associate him. Although his artistic development varied between realism and abstraction, two features crop up throughout his entire output: the urge to establish a new vision of nature and an unremitting search for beauty marked by genuine creative tension.

To give as accurate an idea as possible of the artist's career, the exhibition includes a broad range of his themes, from the landscapes he painted in Tarragona and Majorca (perhaps his best known works, and certainly the ones that contributed most to create the myth of the artist that merged with nature and lost himself in a delirium of light and colour), and his early works from his period of training in Barcelona, to the late works created in Vilanova i la Geltrú, in which Mir intensified the realist side of his work. Also included are the major works for the now demolished Casa Trinxet in Barcelona, in which Mir captured his total conception of the landscape, and a selection of works produced during his campaigns in places like Andorra, Montserrat, Miravet and Gualba.

Viewers will also have a chance to see what life was like in the Mir family and compare real scenes with the results in his works, thanks to some great audiovisual work, which, under the title Mir's moving eye, presents his activities as an amateur film director for the first time. Now in the artist's son's collection, the films were shot between 1930 and 1936, as his life drew to a close.

The opportunity of accessing the family archives has also shed light on some hitherto unknown facets of Mir's life and revealed more about his motives and ideas on painting. It is true that the range of colours in his palette coincided with the one the Impressionists used; he also coincided with them in excluding the colour black, using a host of combinations to paint shadow. But Mir used these technical resources to create a world of his own, a new landscape. Rather than assimilate and reproduce the theories predominating at the time, his work developed more out of an inner need brought into being by his idiosyncratic way of looking at nature and light. Essentially, Mir was a landscape artist who took the landscape into a new, as yet unknown dimension. To do so, he played with and revamped a broad range of complementary colours. This is the key to the power of colour in Mir's painting and the tool that enabled him to structure his works on colour rather than form, imbuing his landscapes with genuine soul.

His independent nature also helped to consolidate the "mythical" side of Joaquim Mir. Compulsive, excessive, Mir was something of a legend in his own lifetime, a facet that biographers like Josep Plá were happy to play up after his death in 1940. 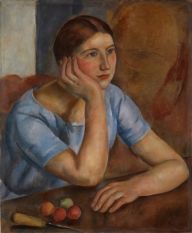