Thanks to sponsorship by Fundación Banco Santander, the latest edition of the Invited Work programme is presenting a work by the contemporary artist from Bilbao Javier Pérez. Entitled Carrion, this installation created in 2011 comprises ten stuffed crows perched on fragments of an ornate chandelier made of red Murano glass.

After completing his studies at the Fine Arts faculty of the University of the Basque Country and at the École supérieure des Beaux-Arts in Paris, where he lived from 1992 to 1997, Javier Pérez's distinctive style rapidly achieved recognition in the art world. His artistic career can be seen in the context of the generation of artists from Bilbao which emerged with force on the international art scene in the 1990s.

In 2001 and together with Ana Laura Aláez (born Bilbao, 1964), Pérez was selected by Estrella de Diego to present his work in the Spanish pavilion of the Venice Biennial. For that event the artist showed a large-format inverted dome made of thousands of glass beads entitled A Piece of crystallised Sky, which is now on display in the entrance to Artium, the Centro-Museo Vasco de Arte Contemporáneo in Vitoria-Gasteiz. On that occasion De Diego defined his work as "something very subtle and at the same time powerful [] fragmented yet simultaneously compact."

In addition to the above-mentioned installation shown at the Venice Biennial in 2011, other notable works of this type by Javier Pérez include Mutations (2004), exhibited in the Palacio de Cristal of the Museo Nacional Centro de Arte Reina Sofía in Madrid; Vegetable Light Skins (2007) for the headquarters of Caja Vital Kutxa in Vitoria-Gasteiz; Lamentations (2009), shown in the cloister of Burgos cathedral; and The Carrousel of Time (2012), a work commissioned by the Salzburg Festival.

From its outset Pérez's creative activities have revealed a multidisciplinary approach based on the use of different supports and expressive procedures. He thus employs drawing, sculpture, photography, video and performance, either as independent disciplines or as part of complex installations of striking formal elegance, conceived to encourage a profound reflection on the human condition on the part of the spectator.

In order to do so, Pérez heightens the expressive qualities of different organic materials, used in conjunction with generally light and fragile manufactured objects. Among the former are leather, latex, parchment, intestines, chrysalises and, in this case, stuffed animals, while the latter materials include glass and porcelain as well as bronze and resin.

Taking this figurative and objetual reality as his starting point, Pérez constructs an argument, often structured as the epilogue to a theatrical plot, which focuses on existential issues. As a result, recognisable objects become the bearers of mystery and disquiet which function to distort the relationship of apparent familiarity with the viewer.

This is the case with the present Invited Work, in which a handsome Murano glass chandelier that lies broken on the ground is transformed into a metaphor of fragility. The artist has explained his intentions: "What particularly interests me with glass is its simultaneously fragile and rigid quality; attractive and dangerous." In addition, glass is red, "the colour of our insides", and thus a direct allusion to the blood and life which, in this case, seem to have spilled out before the sinister presence of the black crows in order to remind us of our own vulnerability and thus the temporal nature of existence.

Using materials of this type Javier Pérez creates sophisticated, enigmatic works that combine beauty and horror with a powerful evocative capacity, frequently producing a sense of unease in the viewer. These works almost always refer to the Baroque idea of tempus fugit and the fragility of things; in the manner of a contemporary vanitas they remind us that time flees away, which is seemingly the central concept in the present work, Carrion (2011). 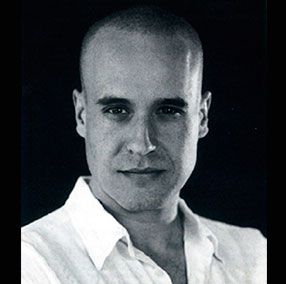