The BBK Gallery at the Bilbao Fine Arts Museum is to be the venue for the first major retrospective in Europe featuring 68 flagship works by Hyperrealist painters, drawn from their output from the early days to the present time.

This, the first major European retrospective dedicated to the Hyperrealist movement, features 68 works from a number of collections. The works are by many of the leading names associated with the movement, and date from the movement’s beginnings in the United States in the mid-nineteen sixties through to its subsequent international development, which continues to the present day. Thirty-four artists have works in the show, from the first generation of US maestros (including John Baeder, Tom Blackwell, Chuck Close, Don Eddy, Richard Estes and Ralph Goings) to a number of younger artists at work today.

Almost fifty years after its debut, hyperrealism remains valid today, and many of the movement’s original artists are still active. Over the years, artists from different generations have joined them to give the style its international flavour.

Organised by the Institut für Kulturaustausch (Institute for Cultural Exchange) in Tübingen, Germany, and curated by Institute director Otto Letze, the exhibition was premiered at the Tübingen Kunsthalle, subsequently travelling to a number of European museums, including Madrid’s Thyssen-Bornemisza Museum and the Birmingham Museum & Art Gallery (UK), enjoying great success at both these venues last year.

In the mid nineteen-sixties a group of US artists started using photography as a basic instrument for painting incredibly realistic representations of contemporary everyday objects and scenes. The group eventually gelled into the hyperrealist movement, known in the English-speaking world as Photorealism.

Under the movement’s tenets, artists were considered Photo-realists if they openly used the camera as an essential tool to produce their paintings. They transferred the image to the canvas in the most objective manner possible, with a painstaking technique that induced in the spectator a surprising illusion of reality, a vision of reality devoid of emotion.

The movement was a major attraction at the 1972 Kassel Documenta, which event marked its definitive arrival as a force in contemporary art. Above all, it caused a major upheaval in an artistic scene dominated since 1945 by abstract art. Critics reviled it as anti-intellectual and reactionary. “It’s not art, it’s great copying.”

Figurative art centred on depicting insignificant themes, and a painting practice based on transferring photographs to the canvas using more or less mechanical procedures caused a huge upset in the art world. Even so, the bond between photography and painting wasn’t exactly new: from the Impressionists to Warhol’s Pop silk-screens, to mention just two examples, the camera had proved an essential ally in the artist’s interest in reality and in his personal environment.

Once modern image technology had taken hold, hyperrealism opened up an extraordinary range of possibilities for art. Since then, technological progress has been another ally for the discipline Although to begin with the artists used images from newspapers and magazines, they soon decided to take the photos they needed themselves. They would then transfer the images to the canvas using a grid system or slide screening before actually brushing or airbrushing the painting into existence. Today the digital age’s hi-res cameras, computers and image programs have revolutionised the art of painting and now allow every artist to create his own made-to-measure method of working. The sheer technique and painstaking accuracy of these mostly large-scale works tend to take the spectator by surprise, similar to the amazement caused in earlier ages by genres that employed trompe l’oeil and the faithful rendering of shines and textures, particularly in the still-life paintings of the Spanish Baroque or 17th-century Dutch painting.

Apart from using cameras, the hyperrealist movement inherited from Pop Art a passion for the icons of consumer society and advertising, although Hyperrealism replaced Pop Art’s peculiar brand of irony with a kind of emotional distancing. Both movements shared a taste for the glassy surfaces of shop windows that allowed the artists to go to town on the images reflected and as often as not deformed in them: cars, shiny motorbikes, neon cinema and theatre signs, the outrageous colours of fast-food restaurants and their bottles of tomato ketchup, art deco architecture and kitsch iconography. Fragments of the American way of life, everyday scenes and consumer articles converted into artistic motifs. Insignificant themes from the world around us dominated by the consumer society, advertising and the mass media, captured first in photographs and then transferred to the canvas by means of a laborious process completely opposed to the immediacy of the snapshot that originated the painting. Themes evolved from American cultural icons to the panoramic urban views or the depiction of human figures more typical of European hyperrealists.

In the early 1960s, the pioneers of Hyperrealism worked in isolation in New York and California, just as photography was coming into its own as a very useful tool for the media and mass culture. Robert Bechtle painted the everyday life of the districts of US cities, Richard Estes began to reflect fragments of the New York cityscape, Chuck Close worked on issues of scale in painting his famous overlarge portraits, and Audrey Flack, the only woman in the original group, was producing her earliest paintings. In general, their preferred themes involved cultural icons and the American lifestyle: Tom Blackwell painted shop windows and motorbikes as symbols of freedom, Ron Kleemann focused on the big American trucks, Don Eddy on shiny car bodywork and Ralph Goings on American diners, the iconic fast-food restaurants.

Other artists produced still-life paintings featuring banal objects. Charles Bell used colourful tin toys and machines, Ben Schonzeit showcased food and Audrey Flack personal accessories. Urban motifs were also a favourite theme. Robert Cottingham was interested in printing works, Richard Estes in telephone booths and John Baeder and Ralph Goings in restaurant scenes. The rural world and its latter-day cowboys, and the American middle class are reflected in the paintings of Richard McLean, Jack Mendenhall and Robert Bechtle. Chuck Close was drawn to portraiture, painting himself and his friends, as was the Swiss artist Franz Gertsch, who was, with British artist John Salt, the only representative of non-American hyperrealism in this first generation.

Today’s hyperrealists work with the very latest media to take photorealism to a new dimension. Clarity of contour and the high definition provided by digital images mean the goal now is literally to turn the object portrayed into a hyper-real object. Roberto Bernardi produces still-life paintings of objects, Bernardo Torrens depicts female nudes, Raphaella Spence takes her images from the tops of skyscrapers or from helicopters, Peter Maier is interested in portraying surfaces and Ben Johnson in architecture. The hyperrealists’ fascination with the city lives on in works by artists like Robert Neffson and Clive Head.

So what we have now are three generations of artists and fifty years of development in theme and technique within a style that, using photography as its starting point, continues to amaze the public, stunned by the impeccable technique and wondrous precision and accuracy with which it depicts objects and scenes from the world that surrounds us. 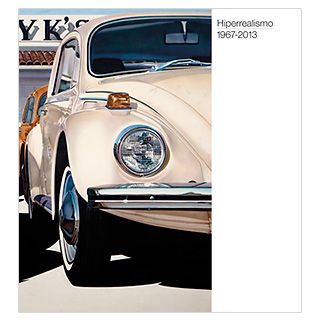 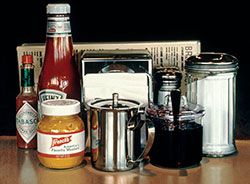 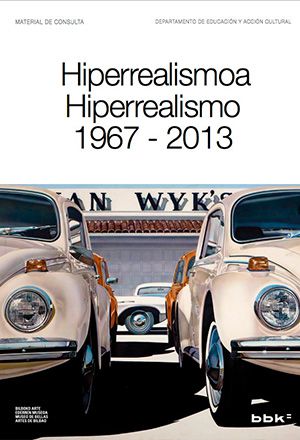 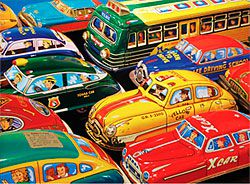