Steve Reich composed his work for quartet and pre-recorded tape in 1988. Structured as three continuous movements, the first third evokes the train journeys from New York to Los Angeles which Reich made between 1939 and 1942 to visit his divorced parents. The result is a recollection experienced as a moving and romantic childhood experience, contrasting with the second movement. This is passionate, emphatic, dystopian and frightening, recreating what might have happened to a Jew (like the composer) if he had found himself in Europe at the same period, when the trains deported people on one-way journeys to the Nazi concentration camps. The last movement focuses on the end of the conflict, but nonetheless doubts and anxieties persist, along with the memory of the devastation and crimes committed by the Nazi regime.

Beatriz Caravaggio's visual rewriting of the work, based on a complex range of archival material from the period which is shown on a three-part screen, is synchronised with a performance of Different Trains by the Kronos Quartet in 1989. The result is to give Reich's composition new life.

The artist has undertaken an extensive process of selection and reordering of images on the deportation of Jews, the concentration camps and their liberation, filmed by the Nazis themselves and later by the allies. The final result constitutes a powerful narrative in which the omnipresent motif of the trains runs through the work from natural landscapes to urban, post-war worlds in a contrast of settings that reflects the route to the horrors of genocide.

Beatriz Caravaggio's cinematographic interpretation, which has been synchronised with the Kronos Quartet's canonical performance of Different Trains from 1989, gives Reich's composition a new visual life. Constructed using a large body of archival material of the period, the installation consists of a three-part screen which generates a triptych full of complex meanings, dynamics, movements and voices. The film runs from nature and landscapes to the return journey to large cities and important buildings, a grey urban post-war world, having passed through the horrors of genocide.

Steve Reich, who in addition to his activities as a composer has produced multi-media works (The Cave, 1939-1993) and participated in sound works accompanied by videos, has responded extremely positively to Beatriz Caravaggio's installation.

In 2013 Steve Reich was awarded the Fundación BBVA Frontiers of Knowledge Prize in the Contemporary Music category for "a new conception of music based on the use of realist elements associated with everyday life and elements deriving from the traditional music of Africa and Asia".

Reich is a composer with a very large oeuvre of exceptional quality and one who has opened up original and refreshing directions in contemporary musical creation. His work and ideas have played a key role in the transformation and evolution of the techniques and musical language of the 20th and early 21st centuries due to the creation and practice of musical Minimalism through processes in which the repetition of motifs, sometimes derived from popular music or jazz, generates very original and beautiful micro-rhythmic textures.

The controlled use of electro-acoustic instruments, on occasions combined with natural mathematical processes, became Reich's trademark and the key to his particular aesthetic, which has had a marked influence both on his own generation and on subsequent ones. For many of the composers who have been inspired by him or whose work reveals his influence, experimentation with new technologies has become a fundamental principal when composing music.

Beatriz Caravaggio was born in Oviedo. She has made a number of musical video clips, documentaries, video creations and video installations. Her documentaries have been shown at the Festival du Film in Montreal, Les Rencontres Internationales Paris/Berlin/Madrid, the Festival de Ciné de Bogotá, and the Festival de Cine Iberoamericano in Huelva. They have also been transmitted on Canal + España, TV3 Televisió de Catalunya, EITB Euskal Telebista, Canal Satélite Digital and Documania.

The artist's videos and video installations have been exhibited at the Fundación BBVA, the Museo Nacional Centro de Arte Reina Sofía, the Círculo de Bellas Artes and La Casa Encendida, all in Madrid; at the Fundació Joan Miró and the CCCB Centre de Cultura Contemporànea in Barcelona; at the Biennale of Electronic Arts in Perth, Australia; and in Canon Digital Creators Context in Japan, among other venues.

Beatriz Caravaggio has been awarded numerous prizes and is the recipient of funding and grants, including the Funding for Cinematographic Production awarded by the ICAA, Spanish Ministry of Culture; Funding for Creation awarded by the Centro de Creación Contemporánea Matadero Madrid; the Festival Minima Prize and the Net.Art Visual Prize for her work Cartografía de la sospecha. 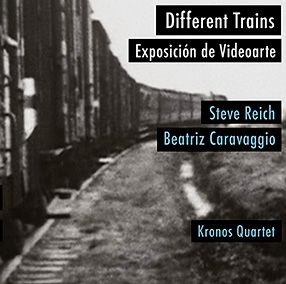 Microsite Differents TrainsAll the information about the exhibition