Organized to mark the centenary of the death of the leading Spanish Impressionist, Darío de Regoyos (1857-1913); The Impressionist Adventure is a major retrospective, featuring more than 130 works, among which are oil paintings, pastels, watercolours, drawings and engravings. Together, they give a profound insight into the media Regoyos preferred, his major themes and artistic development. The exhibition also includes original documents that highlight some largely unknown facets of his personality, his professional contacts and his biography in general.

Collectively, the landscapes of Regoyos provide us with one of the most innovative episodes in Spanish art of the time, particularly through his highly original use of colour and daring portrayals of atmospheric phenomena and effects of the light. In counterpoint are the etchings and oils showing the most sombre of Spanish cultural traditions, which led Regoyos to the aesthetic of what he called España negra (literally, Black Spain). His friendships and contacts with Belgian and French painters, musicians and writers, and his active role in avant-garde art circles (first in the L’Essor group and later in Les XX) made Regoyos the most international of Spanish painters in the late 19th century.

Originally from Asturias, on the north coast of Spain, Darío de Regoyos (Ribadesella, Asturias, 1857–Barcelona, 1913) also had lifelong artistic and family links with the Basque Country, playing a vital role in modernizing Basque painting at the turn of the century. The Bilbao Fine Arts Museum is staging this exhibition in pursuit of its ongoing strategy of exploring Basque art through exhibitions, publications and new acquisitions. The exhibition is curated by Juan San Nicolás, an expert in the painter’s work.

After its presentation in the Bilbao Fine Arts Museum’s BBK Gallery (134 works), reduced versions of the show will go on to the Thyssen-Bornemisza Museum in Madrid (100 works), early next year, and later to the Carmen Thyssen Museum in Málaga (more than 60 works). All three museums have contributed to the exhibition with major works from their own collections. Other contributors include the Musées Royaux des Beaux-Arts de Belgique, the Musée d’Orsay in Paris, the Museu Nacional d’Art de Catalunya and the Museo Nacional Centro de Arte Reina Sofía and many private collections.

The catalogue includes essays by Juan San Nicolás, Javier Barón, head of the Department of 19th Century Painting at the Prado, and Mercè Doñate, until this year Modern Art curator at the Museu Nacional d’Art de Catalunya. They update what we know about the painter’s life and provide an in-depth exploration of his contribution to art.

Divided into a zones, the exhibition begins with the artist’s early period, marked by his discovery of landscape painting and his early travels. It continues with the works Regoyos produced on the theme of España negra, or Black Spain, including his famous series of engravings. These are followed by the Pointillist and Impressionist experiences, the latter providing the thread that runs throughout the exhibition, which is rounded off with a number of original documents and portraits of the painter.

After early training in Madrid, Regoyos moved to Brussels, where he soon became part of European avant-garde groups L’Essor and Les XX. His early development was greatly enhanced by contact with Belgian and French artists James Ensor, Camille Pissarro, Georges Seurat and Paul Signac, and the American James McNeill Whistler.

Regoyos travelled extensively around Spain, Belgium, Holland, France and Italy on the lookout for motifs and themes for his painting. In 1885 he went to London with his friend the poet Émile Verhaeren to visit Whistler, author of a portrait of Regoyos now lost. A few years later he journeyed through Spain with Verhaeren, an experience that led to the book España negra (Black Spain, 1899).

Around that time, Regoyos showed his work regularly in group exhibitions in Brussels, Antwerp, Ghent, Amsterdam, Paris, Madrid and Barcelona. In 1897, thanks to the good offices of his friend Pissarro, he began to exhibit on his own in Paris. At the turn of the century, he linked up with a group of Bilbao-based Basque artists (Manuel Losada, Adolfo Guiard, Francisco Iturrino, Pablo Uranga and Ignacio Zuloaga) who were seeking to breathe new life into the local art scene. In 1907 he and his family moved to Bizkaia and settled first in Durango and, later, in Bilbao and then Las Arenas.

Regoyos was a prolific painter, and he went through several periods during his career. There was his early Belgian period, featuring portraits and landscapes and an interest in the effects of light. This was followed by what Regoyos himself called the España negra, or Black Spain series, a more philosophical, Symbolist phase. A later period is signalled by his use of the Pointillist technique, which he discovered through his friendship with Seurat, Signac and Pissarro. Finally, there is Regoyos the Impressionist, to whom the exhibition pays particular attention, through the inclusion of a large number of works in oil displaying the kind of innovations the new movement brought to the landscape painting of the time.

Regoyos went to Brussels for the first time in 1879, where he met the most innovative artists of the moment. Proof of these international contacts is to be found in the mist-laden landscapes of Brussels and the Portrait of Miss Jeanning (1885), where he portrays one of Whistler’s models during his London visit. But even in that early period his career-long interest in the changing effects of light is clear: he painted his first night views at this time. Place à Ségovie (Square in Segovia, 1882) is a picturesque view of a square in Castile bathed in powerful sunlight. Atmospheric phenomena also gave him the opportunity to experiment with brushstroke and colour, as is clear in South Wind (Leaving Mass in the Sirocco) (1885).

In 1888 he explored the landscapes and rituals of provincial Spain, then fiercely traditional and occasionally rather sombre, on a journey made in the company of the poet Émile Verhaeren, who, on his return to Belgium, published his impressions in a journal. Ten years later those impressions were translated into Spanish, illustrated with wood engravings by Regoyos and published in book form as España negra (Black Spain). Regoyos produced many oil paintings and works on paper on this particular theme, which until the early years of the 20th century he alternated with his Impressionist landscapes. With its crude symbolism, Night of the Dead (1886), subsequently divided into three separate paintings and here reunited, Victims of the Fiesta (1894) and Vendredi Saint en Castille (Good Friday in Castile) (1904) are paradigmatic works of this period.

Regoyos learnt the techniques of engraving through his contacts with the Belgian artists in the Les XX group. He made his first etchings in 1887, later also working with lithographs. One of his best-known productions is the 15-lithograph series País Basco (Basque Country, 1897), 11 of which are on display here. Regoyos gifted the series to his painter friends and some leading Spanish artists of the time, including Joaquín Sorolla and Santiago Rusiñol.

In 1887 Regoyos became interested in Pointillism, after seeing the first Pointilllist paintings by Georges Seurat, Paul Signac and Camille Pissarro in Paris and Brussels. The Nets (1893) is a masterwork from this period, which was relatively short owing to the fact that the new technique prevented Regoyos from painting outdoors. He would later use it occasionally, although only ever partially, as the typical Pointillist touch gave him the opportunity to create new textures and nuances of light in his landscapes.

Regoyos was one of the few Spanish artists to wholeheartedly embrace Impressionist tenets. Despite the initial bafflement and hostility of some critics, Regoyos never abandoned them. Under his maestros Carlos de Haes, in Madrid, and Joseph Quinaux, in Brussels, he discovered the clear palette and the touch brushstroke applied to landscapes, a little appreciated genre at the time, but which caught his attention, and pretty much encapsulated his ambitions as a painter.

What Regoyos wanted to do in his works was to express the immediate impression produced by the appearance of things, the fleeting quality of the effects of light and the solid presence of shade. He worked directly from the life, au plein air, quickly and without preliminary sketches. This accounts for the high number of small and medium-sized paintings in his oeuvre: they were simply much easier to carry around.

Landscape enabled him to explore colour and light, and its fleeting effects. Sunrises, sunsets, cloudy days, the light at dusk and night views, gales and downpours were his preferred themes.Works like Downpour: The Bay at Santoña (1900), Lumière électrique (Electric Light, 1901), The Urumea (1904) or La Concha at Night (c. 1906)clearly reflect his interest in portraying light-related phenomena, including rainbows, daylight and gas or electric light at night and snow, an interest that finds its finest expression in the portrayal of a single motif at two different times of the day: Morning in a Square in Burgos and A Square in Burgos at Dusk, both painted in 1906.

The smoke and motion of vessels and trains, familiar signs of  modern life, often appear in his paintings, as in the view of The Arenal Bridge in Bilbaofrom 1910.

A tireless traveller, Regoyos made regular excursions in the Basque Country to paint between 1884 and 1912, and he lived for long periods of time in Irun, San Sebastian, Las Arenas and Durango. He preferred to work in the fine light of the northern Spanish coast, although he also painted scenes further to the south, like Sunrise in Granada (1911) and Almond Trees in Bloom (c. 1905), captured in Castellón.

Taureaux à Passages (Bulls in Pasajes, 1898), Bathing in Rentería (1900) and End of Shift at the Factory (1901) are good examples of the years of plenitude. They also illustrate some characteristic compositional features such as the bird’s-eye view, the in-depth diagonals and the fragmented settings deriving from the Impressionists’ knowledge of Japanese prints and from the influence of photography.

Although individual human figures are scarce in his oeuvre, groups and crowds do feature quite often, if generally lacking in detail, to imbue market and holiday scenes and processions with life and movement. Dax Market (1909) is a good example of this particular procedure.

In 1912 Regoyos settled with his family in Barcelona. Although by this time seriously ill with cancer, he held two major exhibitions there and even managed to work outdoors, adding to his oeuvre the landscapes of several areas in Catalonia and other scenes which, as in The Chicks (1912), he found in his immediate vicinity. He also painted several views of the city where he died prematurely at the age of 55, just one year later.

This section includes letters, photographs, books and catalogues that go some way towards establishing a brief outline of the professional and personal life of Darío de Regoyos. Portraits done by friends, such as Guitarist: Portrait of the Spanish Painter Darío de Regoyos, by Théo van Rysselberghe in 1882, give us an insight into the more intimately human side of the artist who was, without doubt, the Impressionist movement’s finest representative in Spanish painting. 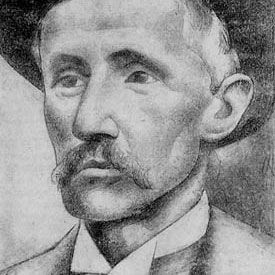 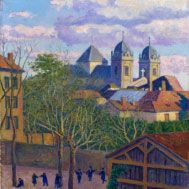 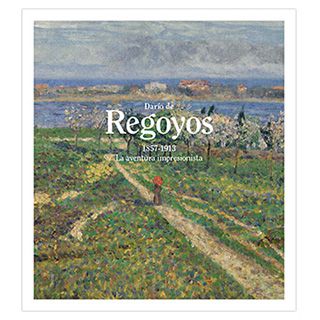 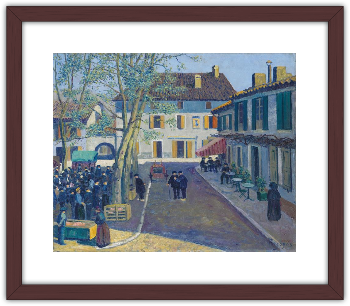 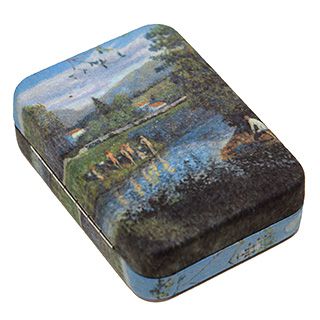