With the start of the first phase in the museum's expansion and the consequent concentration of its activity in the modern building, the museography of the permanent collection is being redefined under the slogan Routes to guarantee the museum's educational mission and to continue being able to show significant works to the public while the construction of the design by Norman Foster and Luis Mar Uriarte is underway.

This twofold objective determined the selection of art now on display, which includes more than 50 pieces that are usually part of both the recommended visit and the museum's educational activities.

Through the selection of works that are displayed in gallery 32 starting today, the Department of Education and Cultural Action (DEAC) can carry on with its programmes for families, patrons with special needs, youths and adults through different routes designed with an educational purpose. Here it is worth recalling that ever since it was founded in 1908, one of the museum's main goals has been to contribute to the education of society; one of the period snapshots conserved is precisely the picture of the museum's first director, the painter Manuel Losada, offering explanations to a group of schoolchildren in 1924.

The system of Routesthat lends its name to the presentation is particularly important in this mission as a pioneering initiative that the museum's Department of Education has been offering to the school community since 1984.

Over these decades, BBK's commitmentto the education programme has been essential in being able to adapt the activities to the ever-changing social reality and the didactic needs of both instructors and a wide and increasingly inclusive range of audiences. The proposals have been diversified?such as the recent Ikuspuntuakinitiative, which can be seen in the museum's BBK gallery?to address today's concerns and to explore new narratives around the permanent collection. 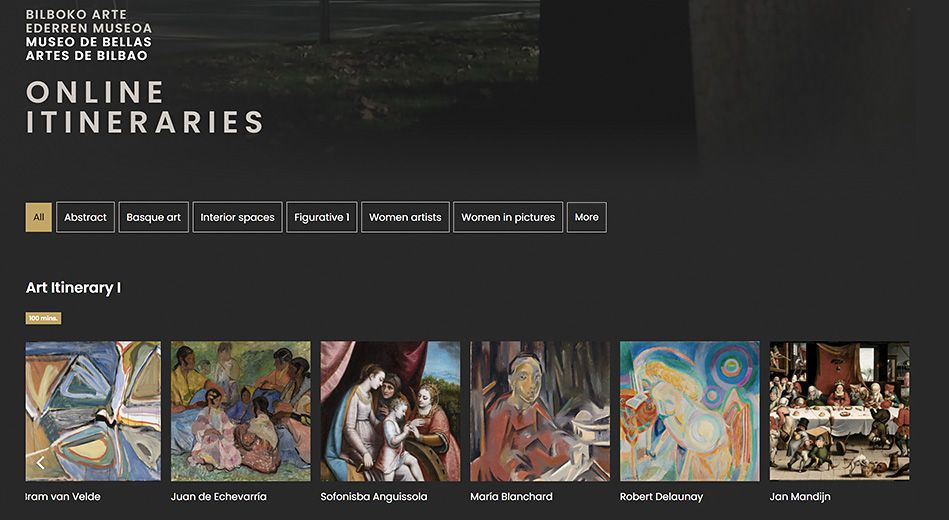 With this activity, the format becomes hybrid with a digital version of two of the routes, Art Routes I and II.

Both the school community and the general public can explore the collection and browse through different periods, artists and styles, while also having the chance to personalise their own gallery and share it with others. This immersive gallery is available in Basque, Spanish and English. The museum is thus extending beyond its gallery walls to reach the educational community and art lovers anywhere in the world via its website.

The route suggested now is a provocative tour that shows the extensiveness and quality of the collection, which spans from mediaeval to current art. Thus, works that are representative of the collection by Lucas Cranach the Elder, El Greco, Moro, Anguissola, Gentileschi, Zurbarán, Goya, Gauguin, Guiard, Arteta, Sorolla, Bacon, Balerdi, Oteiza, Chillida and Barceló and others are displayed alongside recent acquisitions and pieces that are now being presented for the first time.

Another added interest in this activity is showing the different ways the collection has been expanded, including acquisition, dation in payment, concession and donation, among others. In this sense, we should note that the traditional figure of the collector is now joined by the new figure of young collectors who want to join the museum's cultural project, thus supporting contemporary creation and bringing visibility to emerging artists. The donation of works by Elena Aitzkoa, June Crespo and Ignacio Sáez by local three collectors is a clear example of this practice.

The donation of the Dora Salazar work Weaving IIby the recently deceased collector José Ramón Prieto deserves special mention: the museum is paying tribute to this collector and acknowledging his vision in collecting the works of contemporary female artists, as shown in the exhibition Womanology, where this collection was revealed to the public for the first time.

This new design of the museum's collection also includes the extraordinary deposit of the Goyas of Zubieta and revelatory pieces acquired in the past year like the painting The Mystic Marriage of Saint Catherineby the Italian painter Sofonisba Anguissola. It also includes View of El Arenal of Bilbaoby Luis Paret from the National Gallery of London, which generously extended its loan, shown alongside View of Bermeoby the same artist, which the museum acquired in 2017 thanks to the patronage of BBK and the contributions of the Friends of the Museum.

One important set of artworks has recently joined our collection thanks to the generosity of different amateurs, artists or private collectors whose support for our acquisition programme contributes to expanding and constantly developing the collection.

Particularly noteworthy is the donation this year of several significant works by three contemporary Basque artists who have garnered significant prestige on the contemporary scene: Ignacio Sáez, Elena Aitzkoa and June Crespo. Their works also come to the museum from three private collections in the Basque Country?those of Ignacio Elexpe, Adakar Corporation SL and Patric San Juan, respectively?thus revealing the existence of valuable private collecting focused on local art and its most recent expressions.

Ignacio Sáez (Galdakao, Bizkaia, 1971) has developed his artistic practice through a variety of languages. Examples of his ability to originally revive the modernity of painting are the two works donated: a self-portrait and a large-scale triptych, both painted in 2001 for the collective exhibition Gaur, Hemen, Orainheld in the museum that same year. In turn, June Crespo (Pamplona, 1982) and Elena Aitzkoa (Apodaka, Álava, 1984) are now joining the collection with a representation of their acclaimed work as sculptors. In Régimendiurno (Brigitte)(Daytime Regimen [Brigitte]), Crespo uses heavy concrete and cement structures and women's magazines to build a piece that challenges the laws of gravity and suggests the possibility of infinite growth. Aitzkoa, who combines sculpture with painting, performance and film, uses textiles, plaster, wood, stones and other objects from her surroundings and personal experiences in her sculptural group Luz prematura-Lendia song(Premature Light-Lendia Song), whose title alludes to a lake near her hometown.

A contribution from the Friends also made it possible to purchase the three photographs Variation sur la même t'aimeby Itziar Okariz in 2021.