Joaquín Sorolla (Valencia, 1863-Cercedilla, Madrid, 1923) painted almost 2,000 oils on tiny pieces of cardboard, panels, paper or canvas—no larger than 20 x 30 cm—which he called 'observations', 'patches of paint' or 'colour notes'. They are always related to the artist's work at every time in his career, although they cannot strictly be considered preparatory paintings for subsequent compositions. Therefore, they are like a record of Sorolla's way of looking and the best synthesis of his pictorial interests.

This type of note was often used by great artists throughout the 19th century, and Sorolla also used it throughout his life as a way of exercising his skill, as well as serving as invaluable testimony of his freest and most private works. As shown in numerous photographs, Sorolla saved these small works in his studio and often gave them to his admirers, donated them to charitable causes or exchanged them with other painters. Yet many of them were also shown and sold at his major international exhibitions—especially on his American tours in 1909 and 1911—where they were appreciated as concentrated expressions of his talent.

'…You have to paint quickly because when it's lost, fleeting, you'll never find it again!' This is how Sorolla defined his approach. He was one of the most important painters in Spanish art in the transition from the 19th to 20th centuries and the creator of a recognisable oeuvre and a style of his own which takes shape in portraits and landscapes with a sumptuous, precise luminosity that reaches its peak in his paintings of the Mediterranean and Cantabrian coasts.

Small-Format Sorolla is curated by María López Fernández, Blanca Pons-Sorolla and Consuelo Luca de Tena. The first two are also the authors of the essays and timeline included in the catalogue published on the occasion of this exhibition.

The show is comprised of 186 small-format paintings on panels, cardboard or other materials from the collection of the Sorolla Museum. They are accompanied by a small glass case displaying his palette and other tools of the trade which exemplify his vocation as a plein-air painter.

After its successful launch at the Sorolla Museum of Madrid, Chasing Impressions. Small-Format Sorolla will be on display in galleries 32 and 33 in the modern building of the Bilbao museum from 20 November to 23 February of next year.

"Sorolla on the Hunt for Impressions"

During the course of his lifetime Joaquín Sorolla painted nearly 2,000 very small-format oils on card or panel. He generally termed them "observations" although on occasions he called them "patches of paint" or "colour notes". Carried around in specially-made boxes together with his brushes and tubes of paint, these small panels made working outdoors easier. This format was increasingly adopted by the leading artists in the 19th century as it allowed for a rapid capturing of ideas or impressions of things observed, expressed as independent works that went beyond a mere sketch.

Initially considered intimate, unfinished works, small studies of this type were soon appreciated for their creative freedom and as the starting point for potential new compositions. They began to be exhibited and valued as expressions of an artist's most personal and original facet.

Sorolla sometimes used these works to think through new ideas for his compositions but they were often simply exercises. He kept them in his studio, pinned up and covering entire walls, but he soon started to have them framed and they acquired an extensive and significant presence in all his exhibitions. Small in size but large in audacity, they contain flashes of Sorolla at his most brilliant.

After his years of training at the Academy of Fine Arts in Valencia, Sorolla moved to Rome as a grant student (1885-1889) and from there he travelled to Paris to visit museums and exhibitions. The French capital's artistic scene dazzled him. In the 1890s and by now living in Madrid with his wife Clotilde and their children, he began to participate in the major artistic events in Spain and abroad and in 1900 received the Grand Prix at the Paris World Fair, which established his international recognition. With the completion of his major painting Afternoon Sun in 1903, Sorolla considered that he had found his definitive style.

His early small studies reveal the influence of Fortuny and the Italians, both in terms of composition and the expressive device of leaving areas of the wood panel unpainted. Sorolla used these works in preparation for more ambitious compositions but they gradually became exercises in the study of light and colour with an increasingly evident independence from the larger works. Sorolla made use of them as a parallel, experimental tool and above all as a way of looking and of transforming the essence of his gaze into paint.

1. The exhibition at the Georges Petit Gallery, Paris, 1906

In 1906 Sorolla held his first monographic exhibition in Paris, at the modern and prestigious Georges Petit Gallery. By this point he had made a decisive move towards subjects that were more visually seductive and challenging: changes of light throughout the day or over the seasons, the colour of shadows, reflections on water and its transparent effects, backlighting and audacious colour combinations. Furthermore, in the broad expanses of the sea and the beach he had found the setting that offered him most potential. During periods spent on the coast at Jávea in 1905 he discovered a new and different sea, one that had the transparent depth of precious stones.

The Georges Petit exhibition included an extensive display of the small-format works, which acquired great importance in the context of Sorolla's far-reaching experimentation of those years. They reveal his profound practical knowledge of the theories on the use of complementary colours which were so fashionable in Paris, the city that saw the rise of Fauvism, as well as his mastery of perspective.

Following the Paris exhibition Sorolla spent several weeks in Biarritz where the beaches and the fashionable leisure activities to be seen on them offered him new stimulus. His palette became lighter and fresher and his compositional viewpoints.

2. Exhibitions in the United States

Between 1907 and 1911 Sorolla held numerous solo exhibitions: three in Germany in 1907, one in London in 1908, and the major exhibition at the Hispanic Society of America in New York in 1909. The latter was followed by others in the United States: again in 1909 at the Fine Arts Academy in Buffalo and at the Copley Society in Boston; and in 1911 at the Art Institute of Chicago and the City Art Museum of Saint Louis. That same year Sorolla also participated in the International Fine Arts Exhibition in Rome. This international activity was halted by the outbreak of World War I.

For these exhibitions Sorolla had individually enclosed his small paintings in gilt frames with grooved mouldings. He hung them where they could be seen from close up, revealing the importance that he conceded to them as autonomous, independent works. Supplying all these exhibitions obliged the artist to work intensely on medium-sized compositions, for which reason he gradually reduced his output of smaller works.

It is now that my hand completely obeys my retina and my feeling, twenty years on! This is really the age at which one should call oneself a painter: after forty years of work!

From 1912 onwards the major commission for the murals entitled Vision of Spain, for the library of the Hispanic Society of America, in New York, occupied most of the artist's time. When he was not working on that project, he painted for himself, free from the pressures of exhibiting. This was the period of his intimate, silent scenes of gardens and also of some of his most beautiful and finest beach scenes. The rapidity, skill and lightness that he had deployed in his small studies now became increasingly evident in his larger-scale works.

In his final years the small-format scenes that he painted on the beaches of northern Spain, particularly San Sebastián, reveal a moving interest in experimentation: the figures are constructed through very flat zones of colour separated by thin, unpainted strips that leave the neutral grey tone of the priming of the card visible. This abbreviated technique reflects an artist pared-down to the essentials, using his 'small formats' to continue investigating the visual synthesis of the figures and the outdoor setting. 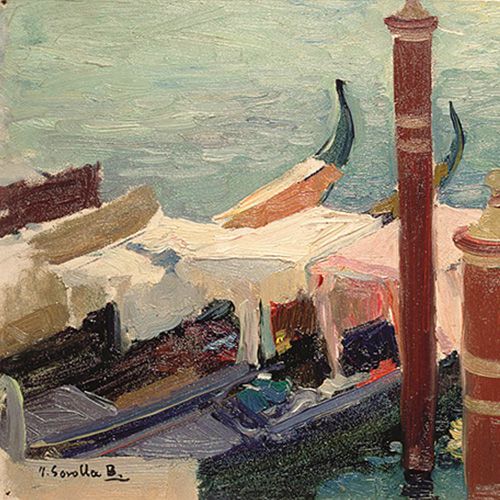