Edition number 52 of the Guest Work Programme, sponsored by Fundación Banco Santander, involves a particularly interesting work by a classic Basque artist, Bilbao's own Adolfo Guiard (1860-1916). The painting in question is Villager from Bakio (1888), an oil on canvas work measuring 127 by 76.2 cm, which comes from a private collection in California, USA.

Adolfo Guiard began art training early on, first in Bilbao with Antonio María Lecuona, a painter of popular scenes and characters, and later in Barcelona with Ramon Martí i Alsina. In 1878 he went to Paris to complete his training, in the process becoming the first Basque painter of his generation to gain first-hand knowledge of the latest developments in art in the French capital. There he met Edgar Degas and writers Émile Zola and Alphonse Daudet, who introduced him into French art circles, where he also came into contact with a dazzling array of artists, including Édouard Manet, Claude Monet and Pierre Puvis de Chavannes.

While he was in Paris, Guiard gradually moved away from the academic style which is the hallmark of his early paintings, as he assimilated a new idiom proper to plein air painting.So the Impressionist spirit learnt from Degas left its more restrained stamp on the work of Guiard, who used delicate drawing in his foregrounds with less controlled strokes in the backgrounds, and a clear palette with lighter tones predominating. The rural world of Vizcaya with its landscapes, locals and customs featured in his most characteristic works.

In 1885 or thereabouts he returned to Bilbao and set up a studio where he gave lessons in painting. From then on, he became the modern painter for young artists and a major figure in the city's cultural life. With Darío de Regoyos, he inaugurated modern Basque painting and also introduced Impressionist aesthetics to Spanish painting.

In 1887 he received a major commission from the Sociedad Bilbaína for three paintings for the club's premises. At the time he wanted more than anything to be in direct contact with nature, and so he moved to the coastal village of Bakio (Bizkaia). Two years later the Provincial Council commissioned a large drape to decorate the Plaza Nueva square in Bilbao. In 1890, now an established artist, Guiard moved to Murueta (Bizkaia) and, at the end of the decade, set up a new studio in Artea (Bizkaia), where he shared with fellow artist Anselmo Guinea. Around this time, he entered into correspondence with the painter Darío de Regoyos, with whom he would later become friends. In 1900 he received another major commission to produce studies for stained-glass windows in the General Assembly building at Gernika (Bizkaia). Three years later, in 1903, he went back to Bilbao, where he spent the remaining years of his life.

The Bilbao Fine Arts Museum has an interesting collection of works by Guiard, including some of his finest paintings, including The Ship's Boy (1887), Keeping a Promise (1894) and, above all, Village Girl with Red Carnation (1903). Altogether the Museum has nine paintings and thirteen works on paper in a range of media: a bullfight poster, considered the oldest surviving Basque poster, watercolours, pens, inks, pencil and pastel.


Apart from its intrinsic interest as a work of art, Villager from Bakio is an important painting in Guiard's career because of the controversy surrounding it in the local press when it was presented to the public in a gallery on a Bilbao street known as calle Correo. The story of the controversy is told by art historian Javier González de Durana in an essay on the painter published by the Museum and the Caja de Ahorros Vizcaína savings bank in 1984. As González de Durana tells it, four days after local writer Nicolás Viar publicly praised the painting in 1888, the poet Antonio Trueba responded with a bitter criticism of the Impressionist style of the work. The debate dragged on and eventually even Miguel de Unamuno got involved. Although everybody agreed on Guiard's masterly drawing, his use of subtly harmonious colour ranges of great atmospheric effect was the subject of heated debate amongst critics and art lovers in general.

Art critic Juan de la Encina pointed up the painting's importance in 1921: "The Villager from Baquio Ramón de la Sota owns is a milestone in the painter's artistic development, as it is here where we find plein air in his painting for the very first time; the villager who stops to take a breather from his work, with his sharp features, leaves an impression of quiet dignity".

Villager from Bakio (1888), Harvest (c. 1892, deposited by a local private collection at the Museum in 1999) and Keeping a Promise (acquired by the Museum in 2008), all belonged to distinguished shipowner Ramón de la Sota. Harvest portrays a group of people at work in the marshlands of the river at Gernika. Keeping a Promise is a landscape with three country people who have stopped for a moment. Before them is a basket containing the two candlesticks and white cloth used in funeral rites. The three works are a compendium of the best of Guiard's style, with masterful drawing and a palette dominated by greys and blues distributed in delicate ranges to create a powerfully atmospheric effect.

Finally, these three paintings were all restored between May and November 1947 in Paris by painter Julián de Tellaeche, who was also entrusted with the task of buying the carved wooden frames that the two works in the Museum still have today. 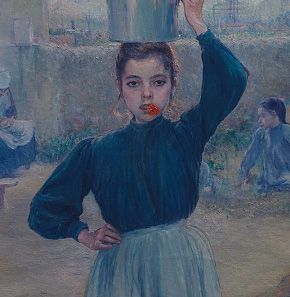 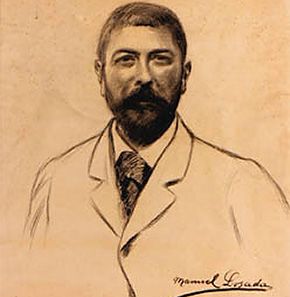 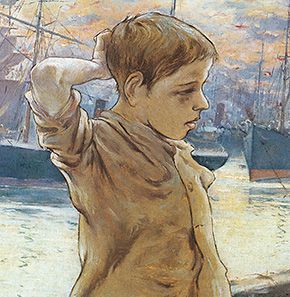 Annotated worksGuiard in the museum